It's a bright spring morning, and the sixteen students that make up Erika Adkins's second-period Constitutional Law class have assembled in the light-filled mock courtroom at the Bronx School for Law, Government, and Justice. Surrounded by posters of significant court cases and a "word wall" covered with legal terminology, the students position themselves in the center of the courtroom to discuss the legal arguments that were made in the 1966 U.S. Supreme Court case Miranda v. Arizona, which eventually led to the mandatory reading of one's so-called Miranda rights during an arrest.

Credit: Courtesy of the Urban Assembly
Useful Scholarship: Practical studies are at the heart, and the library, of the Bronx School for Law, Government, and Justice. 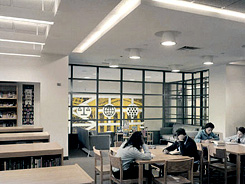 Credit: Courtesy of the Urban Assembly
Useful Scholarship: Practical studies are at the heart, and the library, of the Bronx School for Law, Government, and Justice.

The class discussion is part of a larger project in which students spend several weeks analyzing a court case to produce a legal memo, a document similar to one lawyers might exchange with one another. "It's a lot of reading and writing, and the more practice they get, the more it will help them with any subject," says Adkins, a former practicing attorney, of the assignment. "It also gives them more experience in analyzing a situation and communicating their thoughts in a clear, concise manner."

Jurisprudence is seemingly omnipresent at the school, which offers a stand-alone law curriculum, as well as a range of law-related extracurricular activities. From the mock courtroom's windows, students can see the sharp outline of various Bronx courthouse buildings. When the Bronx School for Law, Government, and Justice moved into the building in the late 1990s, it became the first school in the country to be located within a parcel of land dedicated to a judicial complex. (The plan was to incorporate the school into the courthouse itself, until the Oklahoma City bombing created safety concerns.)

Its location is no coincidence. The school arose out of a heated debate that roiled the South Bronx community in the early 1990s, when the local government began planning for a new criminal courthouse. "The neighborhood was initially against the courthouse, because they felt we needed more high schools and not more jails," explains Principal Meisha Ross-Porter.

Since it opened its doors in 1997, this school for students in grades 7-12 has fostered partnerships with the courts, lawyers, and law-related organizations so that its students can participate in hands-on extracurricular activities, internships, and field trips. Meanwhile, the law curriculum includes courses in legal skills, civil law, government and politics, and business law. In order to facilitate experiential learning, the school was designed with the mock courtroom Adkins uses for her Constitutional Law class, as well as a law library and forensic-science labs.

Ross-Porter says she thinks her students are academically successful because the law has been an effective framework for enhancing reading, writing, listening, and critical thinking. "When you walk in the doors of our school and you look at the trophies along the wall, they're all for mock trial or debate, not for sports," she says. "All of our law classes are literacy based, so they serve to develop their core skills."

Back in Adkins's Constitutional Law class, students explore the legal arguments made by both sides in Miranda v. Arizona as an exercise Adkins hopes will ultimately bolster her students' critical-thinking skills. "The students have very strong opinions, and when I find out what they are, I assign them to take the other side," Adkins says. "It opens their minds to what other people are thinking. At the very least, it's good for them to know what the other side believes so they can make their own argument that much more well reasoned."

These college seminar-style class discussions will help the students complete the legal-memo assignment. Each week, Adkins and her students tackle a different section of the memo in class; students then continue working on that section for homework. In a simulation of real-life legal work, each student receives critiques on his or her work from Adkins or one of the other students. Then the students revise the document. "They have to submit draft after draft," Adkins explains. "I want to instill in them that high-quality work does not happen over the course of one night; you have to rework and revise."

To engage her students, Adkins says, she tries to select cases they can relate to. (She also zeroes in on court cases that will likely be used in statewide history exams.) For another classroom project, in which students learned about trial procedures by acting out a mock trial, Adkins selected a criminal case in which a teenager was accused of murdering the children she was babysitting. The students had to determine whether the teen's parents were legally liable for her actions.

Whether it's the legal-memo exercise or the mock-trial project, Adkins says, putting students' knowledge into practice is what helps drive these legal lessons home. "It's one thing to define what a direct examination or cross-examination is, and it's another to come up with your own questions and present them to your peers," she notes. "It's one thing to say, 'Here are what the possible objections are during a trial,' and it's another thing to apply that knowledge in a trial setting. My students get it because they've practiced it. And they acquire other skills, such as skills in public speaking."

By their junior year, students will have taken classes in subjects such as criminal law or business law. Legal projects are de rigueur in these courses, too. For example, students receive a law-firm-vetted fact pattern (information about a fictional legal case), and then they learn to employ a database practicing attorneys use, called Westlaw, to search for related, precedent-setting cases. Students apply their Westlaw research to bolster their arguments when writing sample case briefs.

Robert Webster, a senior who plans to go to law school, says the law-related classes have helped him in his other classes as well. "In AP English, we talked about Lord of the Flies: What would happen to a society if it didn't have laws?" he says. "So, in terms of other subjects, the law does help you improve your classroom discussions a lot."

But he adds that the law classes will have a lasting impact on him outside of school. "I think very differently now," he explains. "I analyze every small piece of information, because every small piece of information can make the difference. You see something that says, 'This is the way it is.' But sometimes, you don't see behind it to what is really happening. Because of the way the law classes work, that's how I now think."

Beyond the Schoolhouse Doors

Because it operates on a philosophy that encourages experiential learning, the Bronx School for Law, Government, and Justice has cultivated a wide range of community partnerships that link students to law-related programs, internships, mentoring, and extracurricular activities. "We have a stand-alone curriculum, and then we have all these opportunities for students to participate in activities that will enhance their learning, and that's what's special about us," says Principal Meisha Ross-Porter.

One of the school's most involved partners is the law firm of Kaye Scholer, which has worked with the school for a decade. The firm offers paid internships to students at its downtown Manhattan office, it provides access to and training on the Westlaw database, and its attorneys coach the school's award-winning high school mock-trial team, which won the state championship last year.

The school also takes advantage of its proximity to the court complex and its relationship with legal professionals. Lawyers from the Bronx District Attorney's office serve as academic and career mentors. And through a partnership with the Center for Court Innovation's Bronx Community Solutions program, middle school students go on an all-day field trip to watch court proceedings, meet with a judge, and learn about fingerprinting and forensics.

And sometimes the courthouse comes to the school. About once a year, a judge visits the school to meet with students during lunchtime for an informal Q&A. In addition, the New York State chief judge and seven Court of Appeals judges visited the campus in mid-April, and teachers developed a special curriculum to take advantage of their visit.

In Todd Parmett's tenth-grade Criminal Law class, for example, his students read aloud case briefs they'd written, and the visiting judges gave the students feedback. In Adkins's Constitutional Law class, students discussed a recently decided appeals court case. The judge who wrote the actual decision moderated the discussion and concluded the class by explaining the reasons for the ruling.

"The kids get to engage with attorneys and judges," Ross-Porter says of the school's partnerships. "They can have a real connection with people and learn about why they made the choices they made."

Learning Outside the System

Despite the school's emphasis on the law, teachers and administrators are well aware that not all of their students are aspiring attorneys. Still, they say the school's law curriculum resonates across the board. "We teach real estate, the New York City penal code, and business law," says Roberta Lataille, a former attorney who wrote the school's law curriculum. "They're all topics the students can really use, even if they don't become attorneys. If you give them some fancy textbook that teaches them about all these areas of law but they don't learn about the law for their life, they'll be bored."

Ross-Porter also notes that the law classes have the added benefit of encouraging independent thinking and empowering the students. "Students often become more conscious of their rights," she says. "When you have a school like this, the teachers have to be prepared to have students challenge them, because that's what we're teaching them to do. We ask them to think about and to know what is right and wrong, true and not true, and what you have a right to and what you don't have a right to. But we also talk a lot about the fact that though there are things you have a right to, but with those rights come responsibilities.

"Kids also like to have their voices heard, and that's what the law gives you the opportunity to do," she adds. "Understanding the law is very powerful for kids."