Credit: Gregory Cherin
Better Together: Dawn Zimmerman Hummel, founder and executive director of the Child Development Center of the Hamptons, enjoys a class demonstration alongside Adam, one of the school's disabled students. 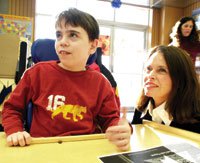 Credit: Gregory Cherin
Better Together: Dawn Zimmerman Hummel, founder and executive director of the Child Development Center of the Hamptons, enjoys a class demonstration alongside Adam, one of the school's disabled students.

The crowd at the ribbon-cutting ceremony certainly defies the glittering stereotype of the nouveaux riches that populate this portion of the Hamptons, an enclave of tony hamlets on the south fork of New York's Long Island.

Today's gathering is no fancy soiree, but a local community gathering to celebrate the new home for the Child Development Center of the Hamptons (CDCH), a three-year-old K-7 charter school with an ambitious agenda: to educate disabled and nondisabled students side by side in the classroom.

Under a bright autumn sky, children afflicted with diseases like cerebral palsy, autism, and Down syndrome mingle with their able-bodied peers, all grasping red and blue balloons spangled with white stars. The parents, continuing their ceaseless endeavor to raise funds, sell cookies at a makeshift bake-sale booth.

Local politicians, clergymen, and educators join the festivities by giving speeches to christen the school, a 20,000-square-foot, modern structure made of blue galvanized steel, mahogany, and cedar. Tucked into a pine-forested section of East Hampton, the building sits on 10.2 acres leased from the town for one dollar a year -- a bargain, given the area's overheated real estate market.

Best of Both Worlds: With a average student-teacher ratio of 15 to 1, and individual attention that's more typical of special education than of regular public school classrooms, the Child Development Center of the Hamptons offers a unique blend of hands-on, all-hands-involved learning.

Above the speakers' podium stretches a banner emblazoned "Reaching for the Stars." No, it doesn't refer to celebs like Alec Baldwin and Kathleen Turner, who helped raise funds for the center. Instead, the slogan highlights the power of big dreams. And few people personify that better than Dawn Zimmerman Hummel, CDCH's founder and executive director, who aspires to improve public education in a unique way.

What began more than a decade ago as a mother's quest to provide her autistic son with an enriched educational and social experience has grown into the first and only charter school in New York state, and perhaps the nation, specially created to meet the needs of both disabled and nondisabled students. (Ironically, by the time the school opened as a K-4 facility in January 2001, Hummel's son was in fifth grade.)

The school has demonstrated an added bonus: Though some of the regular ed students were considered at risk of failure or exhibited low self-esteem in their other schools, they now thrive. "Maybe they were teased or didn't do well because they needed more individualized attention," says principal Tricia Desiderio. "Many of those children have become leaders here."

Classes are small, averaging fifteen kids per grade. All students take their courses together, except for special ed pullouts for speech- and physical-therapy sessions. Each class includes both regular and special education teachers, as well as one-on-one aides for some special ed students. All the students learn from one another: Older students work with younger kids; the nondisabled with the disabled.

The greatest challenge, says Desiderio, is providing a rigid academic curriculum for the "can-do" kids, while providing specialized needs (from classroom equipment to adaptive bussing) for the disabled. Several efforts are crucial. First, CDCH's teachers have both regular ed and special ed training. Another key ingredient is a personalized approach that includes tailored lesson plans. This not only results in improved academic performance, parents say, but also enhances confidence and empathy for those who are different.

That certainly has been the case for Judy Lamay-Black's daughter, a fourth grader. When she was just in kindergarten, at another school, she began struggling with retaining information like numbers and the names of colors. Classmates started calling her stupid. "That's when the red flag went up," recalls Lamay-Black. She enrolled her daughter in CDCH, which "singled out her abilities, her strengths, and used them," she says. For the young student, that meant tapping innate organizational skills, which she exercises by helping out in the school office. Since then, the girl has excelled.

The school's curriculum is based on the New York state learning standards for the arts, literacy, math, science, and social studies, but many CDCH educators often invent lesson plans created with each student's needs and abilities in mind. Desiderio explains how this approach might be used in a classroom studying Native Americans. "Children are engaged in the same concepts but perform at their own level. One kid might write a research paper while another kid, with special needs, draws or has a scribe write their thoughts," she says.

Collette Weir, a kindergarten teacher at CDCH, offers another example, based on classroom experience. "We had three regular ed students trace the letter, cut it out, and think of two or three words that begin with that letter," she says. For students with special needs, such as Down syndrome, autism, or attention deficit disorder, her approach varied. She gave those students a stamp with the letter on it, then had them put the letter on paper. An aide would then say the letter and have the student repeat it. "This way," Weir says, "they could learn among the other students without appearing different."

Creating specialized lesson plans might seem a daunting task for teachers, but the small teacher/student ratio and colleague support make it possible. The key to creating this camaraderie is the staff meetings held each day from 3 to 4 P.M., after the students have left. This time is sacrosanct. It's set aside for brainstorming with fellow workers regarding issues on curriculum, as well as swapping stories on how students are doing. In addition to these team meetings, the entire faculty meets once a week. "When you see everyone rolling up their sleeves and working really hard," says Desiderio, "it demonstrates a circular, rather than top-down, approach to education."

Credit: Gregory Cherin
The Child Development Center of the Hamptons. 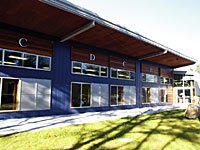 Credit: Gregory Cherin
The Child Development Center of the Hamptons.

In her office in nearby Amagansett, Hummel appears unfazed by the file folders stacked high on her cluttered desk and the constantly ringing phones. "This is the wheel that makes it all turn," she says, flashing a photogenic smile that serves her well in fundraising efforts. "We run it like a campaign office."

On the wall next to her desk is a quote, attributed to Albert Einstein: "It's not that I am so smart; it's just that I stay with problems longer." It's an apt motto for Hummel's against-the-odds pursuit to make special education students part of the fabric of the Hamptons community. This challenge began in 1992, when she moved from southern California to Long Island.

Born and raised in the Los Angeles suburb of Hidden Hills, Hummel skipped college and began working in brokerage firms at age seventeen. By twenty-four, she was a sales assistant at the investment banking firm Drexel Burnham Lambert, where she made deals for some of the biggest tycoons of the day, including media mogul Ted Turner and cosmetic king Ronald O. Perelman. All this changed when the junk bond market crashed in the late 1980s and Drexel Burnham Lambert subsequently folded in 1991.

In 1992, the year Hummel divorced and discovered her son was autistic, she moved cross-country with the three-year-old, to Amagansett. Once there, she faced the prospect of sending Jon to a self-contained, twelve-month-a-year special education classroom in Westhampton's BOCES (Board of Cooperative Educational Services) facility. For Jon, that meant three hours a day on a bus -- longer during peak summer season.

"There we were, in a picture-perfect place, and kids with special needs were out of sight and out of mind," she says. "No one saw these kids. They were on the bus at 6:45 A.M. and not home until 4:30 P.M. I wanted my son to have friends in the community and be an integral part of it."

Hummel began by organizing a Tuesday and Saturday jump start program, and quickly discovered that many other parents faced the same situation. At that point, she set her goals higher, and the idea for a special charter school was born.

Initially the fledgling school operated in a temporary site at a local indoor tennis facility. When it came time to build the school's new campus, which cost $2.3 million, Hummel raised nearly $1 million through fundraising efforts and got a bank loan to cover the rest. Currently she's raising $500,000 more to finish the school's lower level. In 2003, the East Hampton Town Planning Board granted Hummel the parcel of land on which the building stands.

Cash-starved educators might dismiss Hummel's success as the result of her influential connections. After all, how often does a public school host benefits attended by real estate mogul Donald Trump, New York City mayor Michael Bloomberg, and TV news anchor Peter Jennings? But Hummel offers this down-to-earth advice: "People like a grassroots deal. We worked from the ground up, getting support from local organizations like the Rotary Club and the Lions Club. Then I went to local school superintendents and talked to politicians. If you do that kind of groundwork, the sky is the limit."

Every Kid Is Allowed

Only a month into the academic year, the new school still has the feel of a fresh start. The floors have yet to be scuffed, the lockers gleam, and the windows are free of handprint smudges.

Just as Hummel predicted, the integration of students works so well that observers are hard-pressed to differentiate between regular and special ed students (unless someone has an obviously visible disability). This is evident, for example, in the fourth-grade class, as eight students sit in a circle and share what they like best about their school. One girl's response, in particular, sums up the school's atmosphere: "The teachers don't rush you, and they make sure you understand. Every kind of kid is allowed here."

In the sixth-grade classroom, a wheelchair-bound student with cerebral palsy is slowly eating his lunch. A CDCH student since the program's early jump start days, Adam sits at a bulky wooden desk specially made for disabled students.

A regular ed student named David talks about Adam: "We help him with everything, but he makes us feel good. He's fun to play with. It's also nice to teach him. Lately we've been teaching him to say lots of words. And in gym, he's the kickball pitcher. He's great."

A short time later, Adam gets wheeled out to the playground by his friend Daniel, who has Down syndrome. Daniel's mother, Debbie, explains why she opted to avoid the public school in her district. "I felt like he would get lost in the system," she says. "The charter school comes from such a loving place."

The principal called her recently and said that Daniel had thrown himself on the floor during a frustrating day. "Tricia told me that she had a brother with Down syndrome, so she understood. Because Daniel has problems with transitions, we talked about setting more boundaries, as well as raising expectations."

Daniel's social experiences at CDCH have also been positive. Debbie says, "I asked the principal if Daniel was accepted by the other kids. She told me, 'Are you kidding me? They adore him.'"

Evantheia Schibsted is a contributing writer to Edutopia. Dan Ouellette is a former curriculum consultant for the San Francisco Unified School District who lives and writes in Shelter Island, New York.