VIDEO: Using Tech to Understand How the Brain Learns 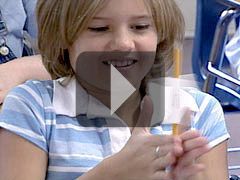 VIDEO: Using Tech to Understand How the Brain Learns

Craftsmen in ancient Egypt used many different kinds of tools to do their work.

Instructions: Look at the tools and read the cards that describe them. Match the tools with the craftsmen by clicking on the empty boxes. If you change your mind, just click on the box again to return the card to the pile.

When you have put a card in each empty box, the computer will work out how many you got right. Keep trying until you get them all right.

In Suzan Hale's third-grade class at Florida's Key Largo School, students have a variety of ways to learn about ancient Egypt: They can go the traditional textbook route. They can use encyclopedias and other research material at the library. They can check out a video.

Or they can do what feels like second nature to so many of them: They can head for the computer and take advantage of intriguing, meticulously researched interactive sites like one from the British Museum, where the activity described above was located.

The World at Their Fingertips

Technology, whether it is a computer, video or telecommunications equipment, or a global-positioning-system (GPS) device, is embraced at Key Largo, a preK-8 school of 1,200 students where all classrooms are wired and where the student-to-networked-computer ratio is 3 to 1. As Principal Frankie St. James says, technology provides "a classroom without walls or limitations for pursuing information."

Key Largo received a two-year, $250,000 BellSouth Power to Learn grant in part because of its leadership in using technology and spending the time and money to train teachers to incorporate it into their instruction. The Power to Learn part of the grant refers to adherence to conclusions outlined in the book How People Learn: Brain, Mind, Experience, and School. First published in 1999 and written by a committee of scholars established by the National Research Council, How People Learn details research on learning and comments on the implications of such research on what is taught and how.

Based on brain research, technology provides opportunities to use such important science of learning principles as pre-existing knowledge, active learning, mental models, transfer, and learning for understanding.

A list of disconnected facts doesn't lead to deep understanding or to easy transfer of knowledge from one situation to another, according to the book. However, knowledge that is organized and connected around important concepts and mastery, which includes being able to visualize a concept, does lead to transfer and deeper, longer understanding.

"Because many new technologies are interactive, it is now easier to create environments in which students can learn by doing, receive feedback, and continually refine their understanding and build new knowledge," according to How People Learn. The new technologies can also help people visualize difficult-to-understand concepts.

A television news show is one example of widespread technology at Key Largo.

Take the kindergarten classroom of teacher Kathy Caputo, who headed for the computer when she wanted her kindergarten students to understand how a flower opens, and she takes daily advantage of the myriad ways information is presented on the Internet.

The online video clips she shows her students ensure that students have a visual image of a concept. It also allows them to start from the same place so that misconceptions that can impede the learning process are addressed before moving on. To set the stage for a book set in a snowy climate -- something few of her Floridian students had experienced -- Caputo had her class try to see their breath in a refrigerator, brought in a pair of mittens, and, again, headed for the Internet.

The importance of being able to transfer knowledge from one context to another accompanies the belief stated in How People Learn and held strongly at Key Largo -- that it is "better to 'broadly educate' people than simply 'train' them to perform particular tasks."

From GPS to Probes

Technology is everywhere at Key Largo. In one class, middle school students are using digital cameras, probeware, and a GPS device in collaboration with younger students at a different school for a study of the Keys. They share information via videoconferencing and post their findings on the Monroe County Community Atlas Web page.

Controlling the environment at Key Largo, such as replacing fluorescent lighting with soft lighting, is made to fit the student, not the other way around.

Other students film school and community activities, including law enforcement, the fire department, the ambulance corps, hospital staff, and U.S. Fish and Wildlife Service employees for a feature aired on the Monroe County educational television station. There is a daily television and radio show at the school via closed circuit, and seventh graders produce public service announcements for a local radio station.

Students in fourth grade without access to computers at home are offered older computers that connect to school software and the Internet through Key Largo's server. Sixth graders are being issued laptop computers. Younger students use a software program that lets them work at their own pace. And Microsoft PowerPoint presentations are almost as commonplace as written assignments.

Technology is just one way Key Largo fits school to the child, not the child to school.

Principal Frankie St. James is not afraid to stand by a program, no matter how unusual, if it produces kids who are more able and eager to learn, whether it's an adopt-a-pet program for all third graders (choices include a boa constrictor), a daily television news show, or a cooking-themed class for children in grades 4-5.

Eighth-grade teacher Jeanne Kurth has found one of the strangest-looking exercises: Brain Gym, also one of the most beneficial. Students do a series of 26 movements, such as placing two fingers on the chin while moving their eyes up and down, or rubbing both cheeks, to promote concentration, memory, organization, language, and other skills.

Kurth, like some other teachers at Key Largo, checks for a range of student dispositions before creating individual learning plans. Does the student work better in groups, or alone? Does she remember more if the information is told to her, if she sees it in writing, or if she is given a project and allowed to discern the knowledge through hands-on work? Is he easily distracted, or do noise and activity propel him to work harder?

As a result of those answers, harsh fluorescent lighting has been replaced with the soft glow of 60-watt bulbs in real table lamps. CD sounds of a rushing stream serve as background music. Eating (healthy) food in class is encouraged."Part of the brain research tells us that children have different learning styles, and that if we want them to do the very best they can in life -- in school -- then we as educators need to tend to what their learning styles are," says St. James.