(DISCLOSURE: As a faculty member at the University of Wisconsin Oshkosh, I am a non-unionized state employee. The increased benefit contributions will cost me nearly $500 per paycheck.) 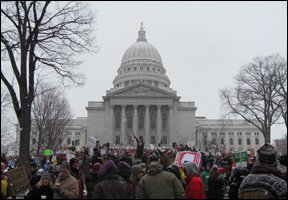 Public sector employees and their proponents are now entering the third week of massive protests at the state capitol in Madison, Wisconsin. This last weekend marked the second Saturday in a row with 65,000 or more participating in rallies - the largest rallies Madison has seen since the Vietnam War. Hundreds of protestors have set up camp inside the capitol, sleeping on the cold marble floors and eating pizza and subs donated by individuals from the United States, France, Egypt, Ecuador and dozens of other countries. Outside of Madison, thousands of workers have been rallying in cities across the State. In addition, supporters throughout the country and around the world have been rallying in solidarity.

At the center of the protest is a budget repair bill proposed by Wisconsin Governor Scott Walker. Among the provisions in the bill are proposals that increase the amount that public employees contribute to their benefits, provide for selling of public utilities (without the requirement for competitive bids), and changes to how Medicare decisions are made. However, the most controversial of the provisions is the emasculation of the ability of public sector unions to collectively bargain benefits and workplace rules. The public sector unions have conceded the increased benefit contributions, but stand firm in their opposition to changes in collective bargaining.

Over the past 15 days, I have visited the state capitol more than I have in the previous decade combined. The reduction in compensation is not why I have carried signs, marched, and grabbed the bullhorn to lead chants from the capitol floor. To me, the attack on more than 50 years of collective bargaining is an attack on the voice of teachers, an attack that comes with a devastating human toll.

In other countries, teachers are referred to as Nation Builders. In Wisconsin, they are called greedy.

"I am not selfish," wrote a former student, now a high school science teacher, on Facebook in response to being confronted by a counter protestor. I sent an e-mail of encouragement to an elementary teacher and she replied that she read it at breakfast on her birthday and broke down crying. "It must be the stress," she said. Another former student, told me that he has decided to quit the profession, saying, "I love what I do, but is it really worth it? Is this what people really think about us?" Over the past week, I have talked with dozens of public educators that have been demoralized over the rhetoric surrounding this bill - upset with the loss of collective bargaining, but devastated by the contempt that is being shown for public workers, specifically teachers.

video
Educators chant: "This is what democracy looks like."

From the beginning, proponents of this budget fix have laid the blame for the state deficit at the feet of hard working state employees and their unions. In January, Governor Walker stated, "We can no longer live in a society where the public employees are the haves and taxpayers who foot the bills are the have-nots." TV and radio advertising campaigns, paid for by lobby groups like the Wisconsin Manufacturers and Commerce business association and Americans for Prosperity, have decried public workers' "lavish" compensation, claiming that "it is not fair," that public sector employees have not made concessions (which, of course, ignores forced furloughs over the past two years for state workers). Even after union leaders agreed to the increased benefit contributions, the cry of "Its not fair" continues.

This message has taken hold in letters to the editor, in the press, and in neighborhood discussions. I have heard people call teachers spoiled, greedy and lazy. Public workers have been called, "a necessary evil." Others have said, "Public workers do not create anything." A friend even told me, "Those state workers are a bunch of lazy @!#$." When I informed him that I worked for the state, he said, "Well, not you . . . you work your tail off."

The reality is that public educators in Wisconsin have been making concessions for nearly 20 years. For most of the last two decades, state law limited teacher union contracts to increased compensation (salary and benefit) just over 3%. As healthcare prices skyrocketed, teachers negotiated to maintain benefits and forgo increases in salary.

The issue is deeper than just compensation and taking a "fair share" of the suffering caused by an economy in shambles. Teachers in public schools, and the unions that represent them, are increasingly under attack. The teachers' voice is missing from education reform discussions. If a teacher points out that a standardized test isn't a good measure of success, they are quickly shot down as being a protectionist. If a teacher points out the inequities in funding of schools in poor communities, they are labeled greedy for wanting to spend more taxpayer money. If a teacher expresses concern that merit pay hasn't been shown to work, or is based on poor assumptions of quality, they are told that they are afraid of being evaluated.

As we saw during NBC's "Education Nation," the teacher unions are often the only voice standing for public educators. This voice does not cry out in defense of the status quo, but demands that education reform is done with teachers, not to them.

For example, the American Federation of Teachers recently announced a plan to overhaul teacher evaluation and dismissal. The plan provides a timeline for remediation, clear consequences, and increased collaboration between administrators and classroom teachers. A few weeks ago, the Wisconsin Education Association Council (the largest association of Wisconsin teacher unions) released a proposal for comprehensive performance evaluations, which recognizes that teachers have different professional needs at different stages in their careers.

Teacher unions are not blameless in the challenges facing education in the US, but they must be part of the solution. Earlier in February, the U.S. Department of Education convened a two-day conference in Denver that highlighted positive relationships between district administrators and teacher unions that have moved education forward.

video
Peter Yarrow (Peter, Paul, and Mary) "If I had a Hammer"

"We have to reject the idea that collaboration is a code-word for cowards," Education Secretary Arnie Duncan said. "Nothing is more demanding at the district level." He continues, ""Collectively you have the power to stop the nation's decline. The best solutions will come at the local level."

Unfortunately, elected officials in Wisconsin and many other states see things quite differently. As former Washington D.C. public schools Chancellor Michelle Rhee famously said, "Cooperation, collaboration, and consensus-building are way overrated." These officials seek to end collective bargaining and eliminate the voice of the teacher, through their union representatives, in educational policy discussions.