It takes courage to stand up to a bully or challenge hate speech. On K-12 and college campuses across the country, students and educators are coming together as "upstanders" to change their communities for the better. Their stories of everyday heroism are highlighted in a compelling new documentary and accompanying educational campaign called Not In Our Town: Class Actions.

Not In Our Town: Class Actions premieres premieres February 13 on PBS. The documentary captures the accounts of two colleges and a public school district that took a bold stand against racism, anti-Semitism, and bullying. Educators inspired by these stories will find a range of resources online to launch similar efforts in their own communities. To coincide with the new film, Not In Our Town is offering mini-grants for teachers and art and video contests for students.

Executive producer Patrice O'Neill says the new film and accompanying social media campaign are part of a grassroots movement against injustice that she and her colleagues at The Working Group have been documenting for more than a decade. They launched a social media site for Not in Our Town in 2010 to grow this movement virally, and also to share resources for educators through a companion project called Not In Our School.

"One of reasons we launched the social media site was that we knew there were incredible stories out there. People needed to see those stories and then build on them to create new ones," O'Neill says. "That's exactly what happened."

For example, consider the story of Lauri Massari. A middle-school counselor from Antelope Valley, Calif., Massari happened to be on a trip when she turned on the TV in her hotel room and heard the school board in Palo Alto, Calif., discussing their district's annual Not in Our School campaign. Intrigued, Massari went online to learn more and was impressed by the videos and testimonials about what the community had accomplished with its anti-bullying work. "She said, look what they did here. Maybe we can do something in our community, too," O'Neill relates. 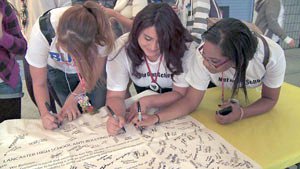 Massari had good reason to be concerned about school climate. Neighboring communities had recently experienced teen suicides as a result of bullying. "She felt strongly that her community needed to do something," O'Neill says. Borrowing ideas from Not In Our School, Massari got busy. Initial efforts at Del Sur Middle School soon expanded across Westside Union School District and eventually engaged the larger community of Lancaster, Calif. "She went on to create an event with 21 schools and the city involved," O'Neill says, reaching some 35,000 students.

Massari and her community's story is one of the three showcased in the new documentary. O'Neill hopes it will inspire more schools to plan their own campaigns. "We're able to take everything Lauri Massari did and learned, put it into a public television show, and also post what she's learned on our site so that other teachers can build on it," the director says. "This is all about teacher-to-teacher efforts, about one town learning from another."

Dr. Becki Cohn-Vargas, who helped start the Not In Our Town campaign when she was director of elementary education for the Palo Alto School District, currently directs Not In Our Schools national efforts. "We want to build the network of educators and expand this work," she says.

What makes the initiative unique is that each school or district decides how it will address the issue of intolerance. "It's not like you sign up and go through a series of prescribed steps," Cohn-Vargas adds. Local campaigns maximize creativity along with compassion, with schools producing plays, organizing pledges, and even drumming up pro-tolerance flash mobs to drown out hate groups.

During her career in education, Cohn-Vargas has been part of various initiatives to close the achievement gap, address racial equity, and make schools safe for students regardless of gender or sexual orientation. "This brings all these issues together," she says, by encouraging students to make their own schools safe places for everyone.

Although each Not In Our School project is different, certain characteristics define local campaigns. Projects tend to emphasize student empowerment. "It's peer-to-peer, with students generating ideas. That's what these films are all about," Cohn-Vargas says. She has seen projects get started in the classroom, through clubs or after-school programs, or as part of student leadership efforts. Teachers or school leaders might initiate the conversation by sharing a video from the NIOT.org website, "but however it starts, you always want the project to come from kids," she adds. (Cohn-Vargas explains how to start a campaign in this post.)

Not In Our School campaigns directly address intolerance, with a focus on issues of race, religion, or gender. "That makes this a little different from more general anti-bullying work," Cohn-Vargas says. "This is about building safe, inclusive, accepting schools."

Another distinguishing feature of these campaigns is an emphasis on encouraging students to be "upstanders" if they encounter intolerance. That's a more active role than bystanders, whose silence can allow bullies or bigots to go unchecked.

A growing online resource collection is available to educators, including lesson plans and classroom discussion guides. Teachers may want to borrow good ideas, such as one school's project to map the places where bullying occurs. Or they may decide to share their own stories of how students are standing up to intolerance. Also available for order is a video action kit.

Special events for the Not In Our Town: Class Actions campaign include:

Has your school taken part in a Not In Our School campaign? Please tell us about your experiences.