Project Au-Some began as an effort to build empathy and social skills between a fifth-grade classroom and preschool children with special needs -- and it quickly turned into more than we could ever have imagined.

At the beginning of the school year, preschool special education teacher Beth Reilly came to Brenna Lamprey's fifth grade classroom to read the book My Brother Charlie by Holly Robinson Peete and Ryan Elizabeth Peete. This led to a discussion about autism spectrum disorders (ASD) and specific behaviors, needs, and similarities. We provided the students with an opportunity to spend their recess time with the preschool kids. To our amazement, everyone in the class volunteered, and students were chosen at random in groups of three to begin their visits the very next week. 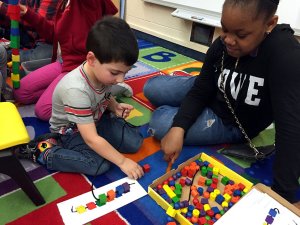 These groups came each week to assist with teacher-led activities such as reading books, singing songs, sensory stations, and fine/gross motor skill development. After each visit, the fifth-grade class would complete a group reflection with Mrs. Reilly to discuss their observations, fears, or surprises, and clarify any misunderstandings or questions. During the next day's morning meeting, the class would debrief together about each group’s visit by sharing pictures and videos, and having a classroom discussion about their experience. This reflection process promoted conversations driven by the students' questions. It quickly became evident, based on insightful questioning and student-motivated actions, that the children in Ms. Lamprey's fifth-grade class were up for more of a challenge.

Mrs. Reilly put together a list of developmental skills, and students chose from it to create their lesson objective. Then they collaborated in their small groups to develop an introduction, lesson materials, procedures, and closure. The students assessed the success of their lesson during the reflection process with Mrs. Reilly and their classmates. Through their discussions, they became more cognizant of disabilities, which spurred their curiosity about other kinds of disabilities.

A grant was written to Project UNIFY to fund an opportunity for Ms. Lamprey's class, or Big Buddies as we fondly began to call them, to accompany their preschool partners, Little Buddies, to a Special Olympics Young Athletes Expo hosted by a neighboring high school. In preparation, the Big Buddies were paired up with a preschool child and began volunteering their recess time every Tuesday as a class to assist the younger children during their PE class. At this point, we saw the effects of the buddy relationships, especially on the Little Buddies. Students with severe gross-motor delays became more motivated through their peer interactions. The preschool physical therapist began attending PE to provide the Big Buddies with a better understanding of how to assist their specific Little Buddy. Both groups of students became more invested in the relationship, and a true bond was formed during these frequent visits.

Due to their bond with the Little Buddies, the Big Buddies began researching various disabilities. We arranged four different guests to speak in Ms. Lamprey's class:

The students' interest level inspired the development of a project-based learning unit on intellectual and physical disabilities. Big Buddies watched a video as an introduction to six different disabilities and then prioritized their top three choices. The groups researched their topics, interviewed a community member with ties to their specific disability, wrote an informational text based on their findings, and created an output component. The output projects included Family Feud, Jeopardy, Kahoot It, a radio interview, Are You Smarter Than a Fifth Grader?, and a news report. These products were presented to members of our school, district officials, and local community members.

As part of the culminating events of Project Au-Some, the Big Buddies were in charge of planning a schoolwide Exceptional Students Week. They provided all classroom teachers with simulations, articles, and resources to implement. Each morning of the week during the school news show, a Big Buddy presented a short video focused on a specific disability. The Big Buddies were given a final opportunity to support the Little Buddies by planning and assisting with Preschool Field Day. Through their leadership during Exceptional Students Week activities, the Special Olympics Send-Off, and Preschool Field Day, Ms. Lamprey's students built a schoolwide community on acceptance of students with different abilities and needs.

The Power of Empathy

Project Au-Some's impact on every student, teacher, parent, and community member involved has been immense. The Big Buddies became intuitive, anticipating the Little Buddies' needs and reactions. Through student empathy surveys, parent surveys, and student-led conversations, the results of Project Au-Some were clear: 16 out of 21 fifth-grade students increased their scores on the empathy survey given at the beginning and end of the school year. Some even doubled their score. The impact that the buddies had on each other not only changed attitudes and biases, but had a positive effect on their daily interactions with younger children, peers, and adults. During Project Au-Some, as teachers, we both learned the most important lesson -- provide the opportunities, but give the students the voice.

If you've had similar or comparable learning experiences in your school, we'd love to hear about them in the comments section of this post.