The real voyage of discovery consists not in seeking new landscapes, but in having new eyes.

Successful businesses and entrepreneurs, Martin suggests, use the knowledge funnel when they work in an area with a lot of unknowns (mysteries), develop strategies for understanding and solving those unknowns (heuristics), and, eventually, develop formulaic responses (algorithms/code) to those challenges, thereby increasing productivity and effectiveness. Companies work their algorithms to a fare thee well to fully exploit their value. Then they loop back to the beginning of the funnel to look for more mysteries and start down the pathway once again.

Martin uses several examples to illustrate how the knowledge funnel works, among them the story of how McDonald's evolved from an innovative but solitary drive-in eatery to a worldwide chain of fast food restaurants. Martin describes how founder Ray Kroc progressed through understanding the mysteries of what customers wanted?developed through trial and error with various approaches to satisfying those customers?and eventually created a formula for ensuring success and profitability. His success in mining the funnel for algorithms that he could replicate enabled him to stay ahead of the competition and even stake out new territory.

Working the knowledge funnel isn't easy. The overall linearity of the process hides a lot of not-so-linear thinking and doing, particularly at the intersection of heuristics and algorithms. The order and structure in the process become apparent only after one has worked through to algorithms and code. 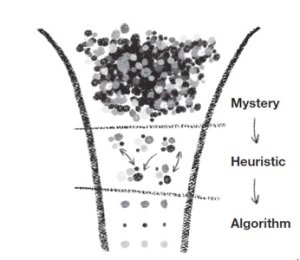 Navigating the funnel is part of evolution, particularly of the cultural variety. Human evolution has given us ways of developing day-to-day heuristics for coping with uncertainties and mysteries as we make our way in the world. It has also given us ways of learning through rigorous honing and practicing of the things we enjoy doing. Using our heads, hands, and hearts, we Homo sapiens are hardwired to think and to act our way around and through problems. In every profession, from carpenters and artisans, to scientists, architects, mechanics, and doctors, the highly skilled continually invent algorithms to free up their time and energy so that they can investigate even more mysteries and challenges about their craft and develop strategies for solving them. As Bronowski observed, "The most powerful drive in the ascent of man is his pleasure in his own skill. He loves to do what he does well, and having done it well, he loves to do it better."

We define ourselves, therefore, not by our algorithms but rather by the mysteries we embrace and the heuristics we create to navigate those mysteries. By creating a path through the knowledge funnel, we establish our stance, discovering who we are and developing our sense of mission and agency -- our way of impacting the world as we navigate our way through it.

Martin's knowledge funnel inspired us to think with "new eyes" about a learning funnel that can be similarly applied to learners and learning. After all, learning begins when learners encounter something they wish to learn. At first, there are many unknowns: How does that work? Why does it work that way? Could I learn to do that?

Accomplished learners are able to think, learn, make, and perform in and across complex problem areas. Working the learning funnel, particularly in creating and understanding algorithms -- rather than memorizing them -- is the essence of rigorous learning, requiring highly developed skills and experience in discovering patterns in complex problem spaces and developing and applying rules of problem engagement.

Learners, including teachers, who embrace the entire learning funnel will, inevitably, move toward creating algorithms to manage what they are learning so that they have more time and energy to investigate more mysteries and thereby move again and again through the funnel. Using others' algorithms is decidedly less meaningful, engaging, and demanding than moving through one's own learning funnel, tackling mysteries one encounters in his own life, and creating value for himself and others.

Elliot Washor, Ed. D. is the co-founder and co-director of Big Picture Learning, a global leader in education reform, research, and innovation, with highly successful schools throughout America, the European Union, the Middle East, and Australia. Elliot is also the co-founder of The Met Center in Providence, RI. Elliot has been involved in school reform for more than 35 years as a teacher, principal, administrator, consultant, producer and writer. His work encompasses school design, pedagogy, learning environments, and education reform. Charles Mojkowski is an independent consultant and Senior Associate at Big Picture Learning, which he helped form in 1995. A former English teacher, Mojkowski also served as an elementary school assistant principal and as an administrator in the RI Department of Education. He served for ten years (1984 to 1994) as the Executive Director of the RI Association of School Principals and in a similar position for ten years (1985 to 1995) at the RI Educational Leadership Academy.