Before the curtain rose on the International School of Lausanne’s middle school production of The BFG, seven 12-year-old actors slipped the straps of wearable puppets over their shoulders and gripped the rods controlling the huge arms. In an instant, they were transformed into 10-foot-tall giants with booming voices, ferocious features, and massive movable hands, bringing the characters from Roald Dahl’s classic tale—Bloodbottler, Childchewer, and of course the Big Friendly Giant himself—suddenly to life. As a visual arts teacher at ISL, I am proud of my K–12 students, who designed and created the hand-sculpted and fully articulated puppets. It was a monumental feat, and it brought together students from our primary, middle, and secondary schools as they worked to design, engineer, carve, build, and paint these creations.

When initially planning how to tackle this project, I was excited at the prospect of bringing the maker mentality to literature and theater. Specifically, I wanted the students to look at every stage of the design, engineering, and creation process and approach its big questions together.

Our giant-making project was scheduled as an informal, after-school activity, which presented some challenges. Time with the students would be scarce, with an uncertain number of afternoons and break times each week. As the structure was rather loose, I knew that it would be more successful if students had an intrinsic motivation to stay involved: If they could see real progress in having these giants come together, they’d be more invested in continuing with the project until completion. The tasks had to be engaging, had to produce tangible results, and would hopefully be fun.

© Gavin Worth
Before building the heads, students spent time thinking about what the giants should look like. 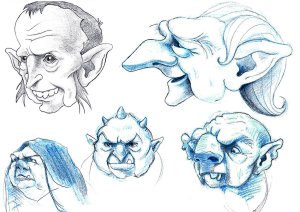 © Gavin Worth
Before building the heads, students spent time thinking about what the giants should look like.

A small group of 12th-grade students and I began with the first challenge: How do we design giants that are interesting, appealing, and full of personality? The main principle that the students explored was how effective design is all about clear communication. After initially consulting the script for any specific visual details, we looked at how much one can communicate using basic shapes. They began to see how character designs that are built upon squares, circles, and triangles can often convey an extremely strong impact with minimal effort. As our designs neared completion, we brought them into the three-dimensional realm by creating small clay maquettes, which would serve as references during the final sculpting process.

I was particularly excited about this step because it required analytical thinking. We needed to design frames that would be approximately 10 feet tall, lightweight, strong, and easy enough for a seventh-grade actor to use on stage. True to the maker ethos, our problem-solving approach was to prototype—we experimented with various hinges, springs, and lever systems in an effort to achieve movable mouths. The results were great, but when we tested them with our young actors, we discovered that the mechanisms proved too difficult for them to use effectively. Similarly, we prototyped and iterated every other element of the construction, taking into account material costs, weight, plasticity, maneuverability, and final appearance. After a number of versions, we decided to craft the frames out of wood with chicken-wire rib cages, and to use Styrofoam for the heads and hands.

© Gavin Worth
A giant begins to take shape. 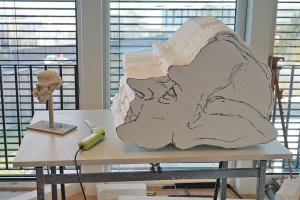 © Gavin Worth
A giant begins to take shape.

After gluing up sheets of Styrofoam into large blocks, the 12th-grade students explored several sculpting tools, including saws and hot knives, which are ideal for shaping Styrofoam. Focusing on the underlying anatomy of bones and musculature, each student completed a set of hands. As the work progressed, they were asked to look at the more subtle forms, such as knuckles, nail beds, and finger alignment. Safety was paramount during this stage. Since melting Styrofoam generates noxious fumes, we took precautions by wearing heavy-duty respirator masks and having fans blowing full blast with windows wide open (making a chilly workspace during our late-winter sculpting sessions). For the head pieces, I carved out the initial rough forms, which students then refined with rasps and sandpaper, crafting the finer details. As word spread of the giants coming to life, more and more volunteers offered their help, including students from the primary, middle, and secondary schools.

© Gavin Worth
A touch of color transforms the Styrofoam heads. 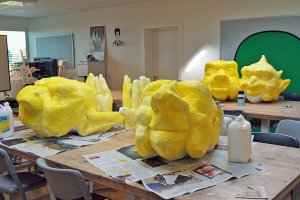 © Gavin Worth
A touch of color transforms the Styrofoam heads.

With a small army of student volunteers now excited to create, the process became even more student-led and truly exciting. Third-grade students were happily splashing on base coats of color. Seventh- and eighth-grade students were applying thin washes to give the pieces depth and dimension, as well as applying some of the finer details. Parents designed and created costumes. Older students were working side by side with younger students, providing an incredibly powerful motivating force. The pace picked up to get everything ready for opening night, culminating on that spring evening when our seven young actors lifted these creations onto their shoulders and strode on stage as 10-foot giants, transporting the audience to Roald Dahl’s wonderful world.

This middle school production did the things that many school plays can do. It empowered students to express themselves in front of others—not only the actors, but those who worked on the set and other behind-the-scenes jobs. It provided a safe space where they could explore movement, activity, and play. But I was particularly impressed with the resiliency of the students in how they took the lead and learned to trust the design process in making these giants come to life.