International educator Scot Hoffman is a big believer in the power of curiosity to drive learning. After nearly two decades of teaching around the globe, he also realizes that school isn't always so hospitable to inquiring minds. (As Einstein said, "It's a miracle that curiosity survives formal education.") That's why Hoffman has developed The Curiosity Project, a self-directed learning experience that engages students, parents, and teachers as collaborators in inquiry.

I first met Hoffman a couple years ago during a visit to the American School of Bombay in Mumbai, India. It's a school where inquiry-driven approaches like project-based learning, design thinking, and maker spaces are taking hold across the curriculum.

Here are highlights of our recent conversations about The Curiosity Project.

What was the inspiration for this idea?

Scot Hoffman: In about my third year of teaching -- this was back in the 1990s -- there were a couple students I just wasn't reaching. A second-grader named Michael was an expert in animals, but there was no place for him to capitalize on his expertise within the curriculum. I taught kindergarten before moving to second grade, and I had some of the same students back again. I was surprised at how disengaged many of the students had become in such a short time. Then I came across a Dewey quote about students who are compliant pretenders in school. They have perfected a way of looking like they are engaged with the teacher's questions, but their hearts and minds are really engaged somewhere else.

Another inspiration was a set of questions that a former professor, Dr. Marsha Grace, posted on her website:

Those questions reminded me of the writers' workshop model. In the writers' workshop, students look at what writers do and emulate how writers work. That's how they learn the craft of writing. I thought, why wouldn't the same idea work with being a curious learner? That was the start of it.

How do you encourage students to be more curious learners?

Hoffman: A teaching partner and I started by interviewing curious people in front of our students. We used those five questions about curiosity as prompts. Our first guest was a mountaineer. We asked him, when did you first become curious about mountain climbing? He remembered, as a boy, seeing National Geographic magazines about Edmund Hilary and Tenzing Norgay summiting Mt. Everest. That captured his curiosity, and then he started learning about rock climbing. The next week, we invited a doctor. Many of the children knew her. She remembered going on calls with her grandfather, a veterinarian, and becoming curious about medicine that way.

After a few of these interviews, we told students: Now it's your turn. What do you want to learn more about? What makes you curious? We provided a structure to help guide them, but they decided what to explore and how to share what they learned.

What did you notice?

Hoffman: We were struck by the engagement and the divergent interests. Students went through this same basic experience together, but their learning was so different. There was often a deep connection to what they were curious about. A boy who wanted to learn about tornadoes had grown up hearing his father tell stories about living through tornadoes. We heard those strong personal stories again and again.

How has the project evolved?

Hoffman: Eventually, we realized that this could be an opportunity to scaffold inquiry for a family. As teachers, we could provide a structure so that parents would be partners in their child's inquiry.

The project typically lasts for six weeks. During those weeks, there's no other homework assigned. We build in enough time so that it's not stressful. And we make the structure clear up front, so that parents understand their role in the partnership. It's also important to let parents know that we, as teachers, are here to support them and their students.

A planning template for The Curiosity Project -- which anyone can borrow or modify -- is available as a Google Document.

Has The Curiosity Project grown beyond your own classroom?

[Hoffman is now out of the classroom and working on broader school innovation initiatives as part of the Research and Development Department at ASB. To see what R&D looks like in a school context, follow the Findings blog].

Hoffman: Second-grade classes at ASB did the project before the holiday break, and an art class at the high school has just started one. A public school teacher in Vancouver, Washington, does the project twice a year. I know of others doing The Curiosity Project in Seattle, New York, South Korea, and elsewhere. Here's a video of former colleague, Mike Jackson, introducing The Curiosity Project to families at Seoul Foreign School.

Tell us about the culmination of the project, when students share what they have learned. What's that like? 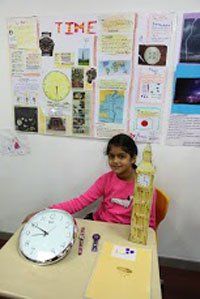 Hoffman: The final event is a curiosity gallery. Getting ready for the gallery requires a shift from focusing on what you're learning to figuring out how you're going to share what you've learned. That can be nerve-wracking, but there comes a time to pivot.

Sometimes parents need reassurance as their children get ready for the gallery. We try to give them plenty of examples. One mother worried that other kids were doing PowerPoints and her daughter was just making a poster. I told her that the important thing to focus on was, what had her daughter learned? The night of the gallery, this girl brought in her poster all about horses. It was clear she had done the work herself. Then she started to demonstrate, with hand-clapping, all the different gaits: "Here's what a canter sounds like. Here's what a gallop sounds like." She had become an expert in how horses move. I saw her mom watching from the back of the room -- tears in her eyes! She was so amazed by what her daughter had learned.

I come away from those galleries thinking, wow, this is an interesting world! And all this learning has happened by students looking at what a curious person does and making those same moves. Some kids go through their whole school experience and never have the chance to be the genesis of their own learning. When our kids are done with this experience, they've still got that curiosity and they're looking for places to use it. That is something we have to get better at handling -- how to continue engaging their curiosity in school after the homework projects are over.

Are you curious about The Curiosity Project? For more information, connect with Scot Hoffman and the R&D Department. Or post your wonderings in the comments below.