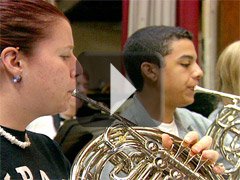 Ryann Hoffman knew what she wanted, and she knew how to get it.

"I wanted something that would give me the feeling I got when I was running," says Ryann, a track star in her junior year at Bay Shore High School in Long Island. "I started with a flowing melody, which gave the impression of running on a trail. Then I added bass chords to give it more depth. Once I got that in, it flowed and it was nice, but there was something missing. So I added percussion. . . . It gave the impression of a heartbeat. The final product was exactly what I felt when I was running."

Ryann's ability to express herself through music is not unusual for a Bay Shore student. The multicultural, moderate-income school district has been rated as having one of the top one-hundred music programs in the country for three consecutive years by the American Music Conference. In 2002, Bay Shore High School was judged a Grammy Foundation Signature School for its dedication to music education (public schools considered for this honor must submit audio samples to a panel of music industry professionals). Students take pride in their music, and parents speak of the maturity and focus that music study imparts.

Bay Shore makes music accessible through technology, a core curriculum that includes music, and an effort to share with the community through student-made CDs and DVDs, school Web sites, and frequent performances.

Ryann's composing experience bears little resemblance to traditional composing, which involved writing scores and copying parts by hand, then assembling a group of musicians to play the piece.

Students in the high school and the junior high work with MIDI (Musical Instrument Digital Interface) connections, which are in essence keyboards hooked up to computers. The keyboard can play the sounds of any instrument, and the computer allows students to arrange the notes in different phrases or change the timing. Music technology expert David Mash of the Berklee School of Music in Boston, calls it a "musical word processor."

Mash adds that the cost of a MIDI lab is reasonable: "An acoustic piano is the standard for music class -- every public school starts with that. You could get the computer, keyboard, and all the software you needed for a MIDI setup for about $2500. The piano would cost you $3000."

Elementary school students learn rhythm and music theory early. By the end of fourth grade, most students are able to play instruments and begin working as an ensemble.

The instrumental program begins at the end of third grade, when all students are asked to rank their first, second, and third choices of instruments to study. District music teachers evaluate the choices, taking into account each child's individual talents and the district's instrumental makeup (a balance of woodwinds, brass, percussion, and strings is essential). Then students are each assigned one of their choices and asked to begin five weeks of free summer lessons.

More than half the class participates. Those who do not are issued another invitation to join music classes during school hours at the beginning of fourth grade. By the end of fourth grade, most students are able to play their instruments and begin working as an ensemble.

In junior high school, MIDI technology allows students to learn music theory by playing the types of music and the instrumental sounds that they hear on MTV.

In the high school multimedia class, students combine music and video in projects, which are often done for credit in another class, or to promote an extracurricular activity. This year, English students made a "Hamlet in the Hallways" video of modern Shakespeare interpretations.

Students also make informational DVDs for the community, saving the district the cost of hiring an outside service. Dan Levenson, a graduate now studying film and photography, says the wider exposure was a motivating factor: "I got hooked. I'd be in the multimedia room late at night, working on my project and trying to make it better."

Through performance and composition, Bay Shore's music programgives students an opportunity to express themselves and connect with others.

Music and multimedia classes focus on self-expression. Multimedia technology allows students to tell a story, not just master a set of computer skills. Music becomes a language rather than a series of pieces to memorize.

Ted Scalzo, who teaches multimedia and directs several musical groups at Bay Shore High School, says, "There are things music does that nothing else does. If you can make them laugh, cry, cheer . . . that's what matters, more than if you nail F sharp. Performing is communication."

The music program encourages collaboration in the technology lab, as well as in instrumental performances.

Marilyn Clemens, a parent of three, says that students involved in music "learn to focus academically. [My son] is better in math. His self-esteem is up, and because he's taught to perform, he's better at speaking in front of an audience than I am."

Terry Nigrelli extols the discipline of performance. "Getting up in front of an audience and executing in real time is a unique skill." He also emphasizes teamwork and self-esteem. "Band and orchestra promote social skills. You're working as a team. You need everyone to play the right note at the right time. Bay Shore is a diverse community, but talent doesn't discriminate. No matter where you're from, or the color of your skin, you can be good at this."

The community has several modes of access to the music program. The high school maintains Web sites for each musical group, allowing students and parents to listen to (and practice with) pieces currently being studied.

Frequent concerts at all grade levels also help build community support. Parents see what their children are capable of when they perform, and community members benefit from performances at the downtown band shell. The yearly Arts Festival, in which various school music groups perform, draws 25,000 people.

Superintendent Evelyn Holman, a proponent of the arts in education, has been reaching out to the community throughout her ten-year career, and she is pleased with the results. Even during the past year's New York budget crisis, she says, the community never thought to cut the music program. "In Bay Shore, cutting arts would be like cutting reading."

Parent and School Board Vice President Mary Louise Cohen agrees. "We agonized over what to do this year, but our curriculum -- and part of that curriculum is music -- had to stay. We need the arts."