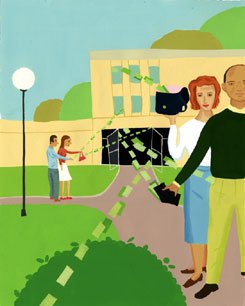 When my sister, a second grade teacher at Las Lomitas Elementary School, in Atherton, California, needs three-ring binders for her classroom, she doesn't go to the supply closet or drive to Staples. Instead, she asks her students' parents for the materials, using the school's Apple for the Teacher wish-list program. And she doesn't limit her requests to desktop supplies. Last year, she submitted a two-page inventory, ranging from pipe cleaners and classroom chairs to a field trip to a working farm -- and parents provided every item.

As of this year, students' families and other community members have donated more than $920,000 to the Las Lomitas Educational Foundation, a nonprofit organization whose funds comprise 6 percent of the operating budget of the Las Lomitas School District. The money pays for arts programs, music teachers, language courses, librarians, and computer labs -- and helps the district maintain small class sizes.

The organization foots the bill for "all the things a lot of schools don't have anymore," says Gerald Traynor, principal of the elementary school.

Atherton parents -- like those of most kids in public schools these days -- are no longer just chipping in; they are subsidizing the most fundamental aspects of their children's public education. As state budgets shrink, parents step in to pay, out of pocket, for everything from "extras" -- which in tight times can mean anything from toilet paper to art classes -- to teacher salaries and core curriculum needs.

It's not cheap. The Las Lomitas Educational Foundation, for example, suggests that parents donate $1,100 per child per year -- and most comply. "It's like an assessment," says parent Kim Marshall. "But, look, I love to give, because basically I'm giving to my child. The budget at school is so small, and you want to help."

Fortunately for many schools, Marshall's attitude is not unusual. School district requests for cash and in-kind donations now come from every direction -- classroom sign-up sheets are ubiquitous, and PTA requests are steeper than ever. "Parents are being asked more and more to help supplement the schools," says Anna Weselak, president of the National PTA. Instead of spending money for their own events, PTAs pitch in for basic needs. "It is amazing the things schools are asking for," says Weselak. "Supplies for art classes, musical instruments, band uniforms, school furnishings -- carpeting! Draperies for stages, janitorial supplies. The list goes on."

The creep of subsidization tends to start with escalating fees for things that were once free. "Fees for all kinds of things that they never had before," Weselak observes. "Towel fees for physical education classes. Activity fees. Book-rental fees. Driver's education fees." And amenities, now defined as tools for education outside of the core curriculum, are not an option unless parents are willing to pay the price. As Marshall observes, "It's not one-stop shopping anymore. You want baseball, you have to drive your kid to another field and pay one-hundred dollars for a league, instead of just playing school baseball. There is a music program after school, but it's not a school program: You pay your check to an independent teacher."

Aspects of public education earlier generations took for granted are considered exceptional, and money to fund those subjects has evaporated as states wrestle with financial crises. "The arts is where you really feel it the most," says my sister, Jodi Brown. "Visual, music, drama, all of that is so important to create a multidimensional child -- and if you have one teacher coming in to teach music once a month, it just does not cut it."

Some people consider art an extra, but what about math? Many schools now ask parents to pay for the most rudimentary aspects of the core curriculum. The Family School, in Eugene, Oregon, for example, couldn't afford to pay for the extra hours it needed from its part-time math teacher. Instead, parents tapped their own veins -- literally: They held a blood plasma drive.

"I suppose the metaphor had some appeal for us -- you have the feeling that this is so ridiculous, this is so pathetic, that here we are," says parent Catherine Flynn, who found herself lining up outside a blood bank in 2003. The blood drive -- which raised roughly $1,500 toward the math teacher's salary -- is just one of dozens of fundraisers (including organic-spaghetti dinners and family carnivals) that the parents at this school, located in a low-income neighborhood, organize every year to raise $8,000 to $12,000 to pay for extra teacher hours. "These are not frills," Flynn says. "You're funding for your programming, your teachers."

As impressive as the sum may seem, $8,000 is a drop in the bucket when it comes to the needs of larger school districts. For the big money, many districts turn to educational foundations such as the one that supports Atherton's Las Lomitas School District. Although the purview of educational foundations changes from district to district, the majority of the 5,000 such organizations in the United States are set up to raise money from parents, alumni, and the local community and funnel it directly to school coffers. They raise anywhere from $500 to, in one case, $20 million annually.

According to the Public Education Network, a clearinghouse for educational foundations, the growth of these tax-exempt organizations soared in 1999, around the time that the economic bubble burst and state budgets began to dwindle. Although educational foundations initially began, in the 1980s, as a way to improve public education, today they exist to simply sustain it. "Educational foundations used to buy the extras: school-band uniforms, sports equipment, enrichment training for teachers," says Howie Schaffer, the organization's public outreach manager. "Now, you are seeing educational foundations being tapped to pay for essentials and basics: in some cases, teacher salaries, classroom learning materials, textbooks, and laptops. We are seeing money channeled into core instructional levels."

Although no one tracks exactly how much money educational foundations raise, Schaffer says those bringing in more than $1 million a year have increased noticeably over the last few years. The biggest groups -- such as the one in Clark County, Nevada, which raised $5 million during the past fiscal year -- are formalized institutions with full-time staff, and boards packed with community leaders such as local politicians, police chiefs, and executives, who don't just hit up parents for cash but also write grants, organize golf tournaments, and pursue donations from local businesses. "There is a strength in the community coming together, the business community and community leaders putting their ideas and energies together to strengthen the district," says Judi Steele, head of the Clark County Public Education Foundation and a former elementary school teacher.

But most foundations are more modest, such as the one in Orono, Minnesota. The Orono School District is among the top five systems in the state when it comes to academic achievement, but its budget was slashed every year between 1999 and 2004. Now, it has among the lowest budgets in the state -- 345th out of the 350 districts in Minnesota. It operated at an $800,000 deficit during the 2004-2005 school year, which is why parents last year donated $275,000, through the Orono Alliance for Education, to help make up the shortfall. Although the foundation was established in 2000 to help pay for some courses and sports teams, these days it supplements basic teacher salaries, which run about $45,000 annually, including benefits.

To put the money together, the organization conducts biannual phone drives; every parent is called at least once a year -- and, so far, 52 percent of the district's families have donated. "When you're dealing with an administration that is not going to increase funding, it's very, very frustrating," says alliance copresident Susan Breon, who estimates that, in addition to volunteer hours and other forms of donations, she and her husband gave nearly $17,000 to the school district during the previous school year. "It's faster and a lot more positive to have parents contribute. Once in a while, I hear people saying, 'When are we going to get to stop doing this?' And I have to say,'I don't know.'"

The pattern also raises a concern that parental subsidization of public education is leading to inevitable socioeconomic disparity: Districts with more affluent parents may have enough money to cover binders and math-teacher salaries alike, but what about low-income districts? Although, thanks to grants from major corporate sponsors with an eye for high-profile projects, poor urban schools sometimes possess the biggest educational foundations, many low-income schools are struggling to raise any money at all, let alone fund and manage a lucrative educational foundation.

Disparities are evident. Consultant Robert Brand studied socioeconomic factors in experiences of schools with private fundraising for the Poverty & Race Research Action Council in 2003. "The more formalized educational foundations were in more affluent districts," he said. "In that way, it reflects an ongoing inequity."

Even where parents have the capacity for open-ended giving, it is worth asking whether it's a good idea to encourage such behavior. When parents take the pressure off school bank accounts by opening their wallets, they may also, in effect, be easing the pressure on federal and state legislators to solve budgeting crises. "Raising money one time, you get a great response, but doing it year after year for something that we are supposed to be getting from our government? It's not sustainable," says the National PTA's Weselak. "When parents and local citizens subsidize public education, it ceases to be public education."

"With parents subsidizing the needs of schools, it's not fixing the problem," she adds. "We need to really take a look at how schools are funded, and where our tax dollars are going, so we can guarantee public education in the future."

Janelle Brown is a freelance journalist in Los Angeles. Her work has appeared in the New York Times, the Los Angeles Times, and Self and on Salon.com.