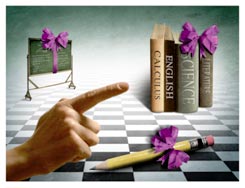 Yes, it's the thought that counts. (Remember that when you get yet another set of cutesy guest towels from your mother.) But it counts a whole lot more when giver and givee are thinking the same thing. DonorsChoose.org makes charitable giving -- and receiving -- a little more seamless, and it's about to expand its operations to benefit a lot more educators.

The nonprofit Web site allows teachers to post requests for projects or supplies that potential patrons can then select to fund. When Cynthia Rosado, a first-grade English as a Second Language teacher at P.S. 169 in Brooklyn, gave it a shot two years ago, she asked for $1,200 for two sets of guided readers. She got the funding (and the books) in a matter of days.

Since then, Rosado has had more than forty proposals funded -- for things from books to art supplies, from Legos to a laminating machine. And personalized philanthropy can get even more personal. Several of the people who have contributed to DonorsChoose projects at her school have come to visit the classrooms. "They want to know that their money is really getting to the kids," says Rosado.

Benefactors donate by check or major credit card to DonorsChoose, which then buys the goodies and sends them to the teachers. About half of the proposals get funded within sixty days, and, overall, 75 percent are backed.

DonorsChoose gives contributors of every tax bracket greater control over their largesse and a closer relationship with their benefactors, who are encouraged to send thankyou notes. "Even though you might have only fifty dollars to give," says Ilana Goldman, the company's vice president, "we're going to treat [our donors] the way the Ford Foundation treats someone who has $1 million to give."

Until recently, this eBay for educational philanthropy was available only to teachers in the New York City school system, where it has channeled more than $2 million (more than 60 percent of which came from outside the Big Apple) into over 1,400 classrooms. Now, however, schools throughout North Carolina can participate, and San Francisco Bay Area and Chicago teachers can get on the gift list this winter.

No need to send that letter to Santa Claus after all.