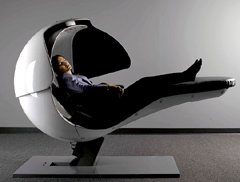 Anita Landoll, a special-education teacher at Halifax County High School, in South Boston, Virginia, counts herself lucky when she finds a few minutes to spare during the school day. When she has no scheduled meetings and no papers to grade during her planning period, she turns off the lights, lays her head on her desk, and dozes for five minutes. "Sometimes, I get so caught up with trying to meet demands that I just need a break," she says. "If I'm nodding off, I figure I need it." Afterward, she feels refreshed and ready to tackle the rest of the day.

Even though such midday naps are the norm for kids in preschool and kindergarten, they're considered a form of slacking for anyone with a full-time job. Now, however, a small but growing movement is bringing the benefits of the so-called power nap to people of all ages.

Corporations including Ben & Jerry's Homemade Ice Cream and smaller companies such as Yarde Metals, in Southington, Connecticut, have introduced nap rooms for their employees. In New York City, a business called MetroNaps has opened two "sleep-pod centers," where weary New Yorkers can come in off the street for twenty minutes of shut-eye in hooded, pod-shaped chairs for $14. Scientists say these businesses have it right: By allowing the brain to unload fatigue and mental clutter, midday naps lasting five minutes to an hour can help people heighten their learning skills and be more alert and productive.

"Sleep researchers still do not fully understand how the brain works during sleep," says Michael Twery, director of the National Center on Sleep Disorders Research, "but the evidence so far suggests that short naps can be good for those looking for a refresher during the day."

Recent studies show that short naps are beneficial for adults working any type of high-performance job. A NASA study found that an average nap of twenty-six minutes boosted airline pilots' performance by one-third. Hour-long naps involving rapid-eye-movement sleep can be even more beneficial. A 2003 study from the National Institutes of Mental Health showed that a sixty-minute nap reverses information overload and allows the same improvement in visual learning as six hours of slumber. Researchers tested two groups: One didn't sleep during the day, another took sixty- to ninety-minute afternoon naps. The first group's memory and learning skills tailed off into the afternoon and evening, while the latter fared significantly better.

The longer you rest, however, the more likely you'll be groggy when you wake up. Err on the side of too little sleep, and aim for a maximum of thirty minutes -- any more than that, and you'll enter the deeper, slow-wave sleep period between the thirty- and sixty-minute marks that is much harder to shake off during a workday. If you have time to doze for more than sixty minutes, your brain should shift back into a lighter sleep from which you can more easily perk up. Then, give yourself at least a minute to come out of the nap.

Power naps can be better energy boosters than caffeine, says Sara Mednick, lead researcher on the NIMH study and author of Take a Nap! Change Your Life. "Exercise can enhance memory process just as well, but there's a certain quality of boosting your learning capacity that is solely specific to sleep." Mednick is now doing a study comparing the effects of caffeine to power naps, and the results so far show that those using caffeine perform far worse than nappers on memory tests. A recent study from the Harvard School of Public Health and Greece's University of Athens Medical School suggests that regular midday naps can substantially cut your risk of heart disease, perhaps by reducing stress.

If you do get a few precious minutes for a power nap, how can you make the most of them? Find a quiet place that's not too hot, too cold, or too bright. The car is a popular spot (a survey of power nappers found that nearly 70 percent furtively catch a few winks in their backseat during lunch hour), as is a couch or a mat on the floor; teacher Anita Landoll appreciates her comfortable desk chair.

Put on some relaxing (or boring) music. If you worry you can't wake up on your own or find an alarm too jolting, mix a music CD that starts with quiet songs to induce you to sleep and concludes with louder, more energetic tunes. Alternatively, a company called pzizz sells software for your MP3 player that will create power-nap mixes for you.

It's ironic that our 24/7 society, which looks down on napping, is the same one that has been slowly but increasingly robbing its people of sleep. But as far as science is concerned, midday napping is finally getting some respect -- even if milk and graham crackers aren't included.