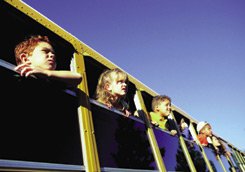 When Matthew Mandell took his son to meet the school bus that was to take him on a field trip from the Bronx to Lower Manhattan, he was shocked to find the vehicle had no seat belts. Mandell and the other parents protested and ultimately refused to send their kids on the outing. "No child should be in a moving vehicle without a seat belt," he says.

Mandell's surprise is understandable. New York state passed a law in the '80s mandating seat belts on new school buses (although those that predate the law can still be used). Only New York, New Jersey, and Florida require seat belts be installed in new buses; a similar law is going into effect in California in July. The latest state to join the debate is Illinois -- where the state legislature is considering a measure to mandate seat belts on buses.

We can't imagine cars without seat belts; why aren't buses subject to the same regulation? To start with, there's no unanimous agreement they're even necessary. School buses are constructed with high, thickly padded, closely spaced seats that protect passengers by "compartmentalizing" them in a crash, says Charlie Gauthier, executive director of the National Association of State Directors of Pupil Transportation Services. Studies conducted in the late '80s confirmed that compartmentalization works and concluded that seat belts would provide little or no benefit in these vehicles -- and may, in some cases, cause injuries.

Consider the figures. Roughly the same number of kids drive or walk to school as take a bus: about 24 million. Yet each year, approximately 169 children are killed being driven to school by an adult, while about a dozen die in school bus crashes. "With or without seat belts, the safest place for a kid to be is on the school bus," Gauthier says.

Plenty of people disagree with Gauthier -- the National PTA and the American Academy of Pediatrics support school seat belt laws -- and Alan Ross, president of the National Coalition for School Bus Safety, says getting kids in the habit of buckling up every day can save their lives later on.

Seat belts can add $3,000-$6,000 to the cost of a new bus and reduce the number of seats 25 percent or more because the newly designed seats take up more room. So districts would have to buy more buses, and pay more mechanics and drivers. These expenses are sticking points in passing legislation that mandates seat belts on buses -- or even getting the laws introduced into state legislatures. Lawmakers question whether financially strapped school districts can assume these added costs. Until they can, the kids might just need to hang on tight.