The story has a familiar beginning: The parents of an autistic child can't find a public school program they consider suitable. They ask, then plead, and finally sue the school district to pay for private education. The battle brings incalculable stress to a family already suffering the grief and turmoil of autism, and huge legal bills to a district that can ill afford them.

Jeffie Muntifering, of Calaveras, California, has a son, Joe, now eighteen. She remembers the dispute over his early education this way: "So nasty. Ugly. Emotionally costly and expensive."

After Joe was diagnosed with autism at age three, his mom scrambled to find a good public school placement. She finally gave up, and after reading everything she could, taught him at home. A year later, they enrolled him in Los Angeles's Lovaas Institute, one of the premier centers for early autism treatment, and tried to get their school district to pay.

The two sides eventually settled the case, and Joe's parents collected partial reimbursement. But here the story takes an extraordinary twist. The school officials who had opposed the family searched their souls: Did they really want to spend time and money fighting parents? Why not redirect those resources to serving children like Joe? Educators, caseworkers, and advocates from various agencies responsible for the disabled -- groups unaccustomed to collaborating -- teamed up to create top-notch autism programs in the community. And they tapped parents such as Muntifering for help. 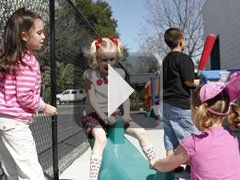 Today, autistic children in a five-county swath of California's Central Valley and Sierra foothills have access to an unheard-of continuum of services in the all-important years before age seven. The region offers more than forty free, comprehensive, individualized home-based and school-based programs through innovative interagency agreements and public-private partnerships.

Kids under three spend twenty to thirty hours a week in treatment based on the principles of applied behavior analysis (see "Educators Deal with the Growing Problem of Autism"), and from age three on, it's thirty-five to forty hours a week, forty-seven weeks a year. Parents who don't want such intensity or pure ABA may request an alternative. An autism diagnosis can qualify a child for services, but a team of educators, autism experts, and social-service professionals determine the final placement. Services cost, on average, $65,000 a year.

"That's one of the truly remarkable contributions here," notes Jane Howard, a psychologist and behavior analyst and codirector of the Kendall School and Therapeutic Pathways, which provide home-based and center-based services for children with autism spectrum disorder (ASD). "Full-blown intensive intervention is not restricted to families who have the resources to pay for it themselves or hire an attorney. This really represents a commitment by the community to meet the needs of every child."

The region had only a handful of autistic children when the first programs started. Now, nearly 200 children participate. Their parents receive training in behavioral methods to use at home, and the children have carefully structured opportunities to learn and play with typically developing peers. These inclusion efforts ramp up as the child gets older to smooth the transition to elementary school.

The Valley Mountain Regional Center, the area's state-funded agency for developmental disabilities, coordinates the service network in collaboration with local education agencies. The network cuts across the school districts of Amador, Calaveras, San Joaquin, Stanislaus, and Tuolumne counties. The regional center also evaluates children in a clinic that includes a psychologist, a behavior analyst, school district representatives g, and a parent representative from the Family Resource Network. Private providers, such as the highly respected Kendall School and the Central Valley Autism Project (a Lovaas replication site) run ABA programs under contract to the center, and there is tight coordination with public schools.

To make all this happen, local officials have transcended traditional barriers between public education and private, between "experts" and parents, and, most important, between two government bureaucracies charged with serving the disabled. In California, the Department of Developmental Services, represented locally by regional centers, typically serves the disabled from birth until age three and then from twenty-two until death. The Department of Education, through local districts, handles the intervening years. (Although the details vary from state to state, all have a similar division of responsibility.) In the Valley Mountain region, the players have come together to share the costs of treating autistic youngsters, often 50/50.

By paying for all children after the age of three (and for some after they're seven, four years longer than legally mandated), the regional center is betting on reduced costs when those kids turn twenty-two and presumably have the skills to live and work independently. "In the long run, we'll save money," says Tara Sisemore-Hester, the center's coordinator of autism services. And by investing heavily in early intervention, school officials hope to reduce special education costs in later grades.

"Young children -- that's where we really want to put our energies," says Sandee Kludt, assistant superintendent for special education for the San Joaquin County Office of Education. "The research is showing that for at least half of them, if we can get in early and do intensive services, we have a really good chance of making a difference."

Sisemore-Hester says 75 percent of the children in the region's early intensive programs make substantial progress on their individual education plans, or IEPs. About half of the kids wind up in general education with no extra support, indistinguishable from their classmates academically and socially. That's about the same track record the Lovaas Center claims. (No programs report better statistics, a clear sign that autism treatment still has a long way to go.) What happens beyond the school years -- whether the gains made at age five translate into successful living twenty years later -- nobody knows. The first children to receive the region's ambitious services are only now graduating from high school.

Joe, a senior at Calaveras High School, plays varsity football, wrestles, loves guitar, and has a 3.2 grade point average. He plans to attend community college next fall and wants to study music and history. His mother, an accountant by training, now works as an autism consultant, helping parents throughout California obtain services for their kids. She says she hasn't seen an early-education model that comes close to what the Valley Mountain region offers. But she believes that situation will change as educators and administrators realize they have a brief, precious opportunity to rewrite a life story.

"Autism once meant hopelessness, but that's certainly not the story line today," she observes. "It's loaded with hope. Kids like my son have given us all a whole different picture of what children with autism can achieve."

Fran Smith is a contributing writer for Edutopia.