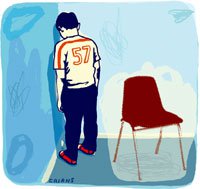 Standing in the doorway, just behind my secretary, he looked surly, and I wasn't happy about having to deal with him. But Jo, eyebrows hoisted, said a clutch of ninth graders in a name-calling dispute were occupying the vice principal's attention. She handed me the referral. With it came an experience that has kept me hopeful about the prospects of vulnerable kids, optimistic about the positive influence adults and educators can have on young people, and acutely aware of the fundamentally existential nature of the educational enterprise.

The seventh-grade boy, whom I will call Seth, had transferred from a school in a neighboring county for a couple reasons: He was expelled for bringing a loaded .357 Magnum to school, and he had been removed from his father's custody. No one knew his mother's whereabouts.

There were many variables at work in the case: No mom. No one at home except late at night, after the bars closed. His clothes were dirty. He had no friends. But the social worker speculated that one particular event in Seth's life explained his problems.

His father, apparently a Vietnam vet in the throes of posttraumatic stress disorder, had taken Seth, at the time a sixth grader, deep into the mountains south of town and deposited him there along with a week's supply of food and water, a fishing line, a hunting knife, and the admonition that the sooner he learned to take care of himself, the better off he'd be.

The boy spent several days alone before the authorities located him, but he was allowed to remain with his father while the wheels of the court system -- and the social services bureaucracy -- slowly turned. A counselor was engaged; she said anger management would be the focus of Seth's treatment.

Now Seth was standing before me. I told him to have a seat.

"Mrs. Smith says here she told you three times to stop tapping your pencil on the desk," I said. "You refused to stop. When she told you to go to the office, you called her a name. Seth, is this what happened?"

In the space of the few seconds it took me to spool out my standard lines, he'd become so agitated that his face was red, and his head, so taut were his neck muscles, vibrated at an appalling rate.

"I didn't do it! It's not fair! Why am I always -- " he blurted out. And then he threw himself to his feet. The suddenness of the movement frightened me. Instinctively, I drove my body back into my chair, away from him, raising my hands protectively before me.

Then he spun and strode to the farthest corner of the room. Standing there, his back to me, his head bowed and shoulders tucked in toward his thin chest, he mumbled something.

It was two, three minutes -- a long time -- before he turned away from the corner and came back to the chair. Still composing myself, I drew a breath. "Are you okay?"

"What were you doing, Seth?"

He paused, raised his eyes until they bore into mine, and said, "I understand there will be consequences for my actions, Mr. Ophus. I'm sorry. I'm getting better at being good. My counselor is helping me. I don't want to let my foster parents down. They're really cool. I won't get in trouble in Mrs. Smith's class ever again. I want to do good in school. I'm going to be a pilot."

Minutes before, my hypothalamus had urged flight. Now, all my instincts told me to reach out to a wounded child struggling to cope. That he could be released from hatred and self-loathing by a recollection of the nurturing forces in his life and a simple prayer that began "Our Father" was to me at once relieving and pitiably ironic, incredibly touching, and inspiring. What's more, I felt obligated by the transformation I'd just witnessed to learn what enabled that change.

I learned about resilience, a quality at-risk kids who've beaten the odds display: a capability -- like a beautiful chord waiting to be played -- residing in each of us no matter how beaten down we've been or suddenly are. I learned that certain protective factors need to be present in the life of an at-risk young person before that chord can be struck. Martin L. Krovetz, in his useful book Fostering Resiliency, identifies them: at least one adult who cares deeply about the child; high, clearly articulated expectations plus support; and meaningful involvement and responsibility.

Creating a Home at School

Given the enormous number of at-risk kids in this country, we need to create "home" in our schools. We need to champion small class size, teacher-advisement time, staffing levels necessary for schools within schools, financial support for sports and other extracurricular activities where coaches and directors make real differences, even stipends for home visitations. At-risk students -- all students -- must acquire the sense that they are known, are valued, and belong.

Seth taught me about resilience, which resulted in my passionate commitment to personalizing education for my students. But I find Seth's story requires a coda. Even now, years later, the rest of my encounter with him that day comes back like a recovered memory.

I got up from behind the desk and walked to Seth, dragging a chair to sit close. I leaned forward, patted him on the knee, and said, "Let's go down and talk to Mrs. Smith. If you can apologize to her sincerely, she'll probably be willing to forget the whole thing. I'm impressed by how you got yourself under control back when you were so angry. I'm proud of you, Seth."

He thanked me. Then he said, a small smile on his face, "Oh, Mr. Ophus, I suppose you'll want this. I probably shouldn't have it in school." He reached for his back pocket.

Before I could blink, he withdrew an X-Acto knife and held it upright in the slim space between us, not more than a foot from my face. The image of a cheek slashed to the bone flashed through my mind. I did not move except to raise my hand slowly and, my eyes glued on his, carefully take hold of the knife's handle where his narrow fist couldn't encompass it.

I took the knife from Seth. I felt very tired. I asked why he had it. He said he was working on a balsa-wood model-plane kit during lunch. Though he knew he was supposed to be on the playground, he felt it was too cold to play outside. So he stayed in, up where the music modules were, where he could be alone and work on his plane. None of the teachers on duty checked there.

We walked down the hall to Mrs. Smith's classroom. He apologized. Mrs. Smith accepted. The bell rang.

Seth's final lesson? A reminder that if we educators dare to engage fully in the real and unique lives of our students, what we find might be a messy, ambiguous, or even scary state of affairs. And it is still worth it.