A couple of recent incidents have reminded me about how important it is to not take knowledge, things, or people for granted. The first occurred in a fifth-grade classroom, where I was doing a residency that included some iMovie work with the kids and their teachers, and we were talking about the use of the Ken Burns effect, named after the famed documentarian, in which a video or film zooms into or pans across still images. 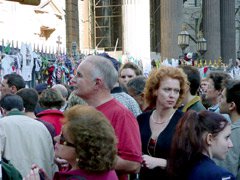 The image included here, one I consider likely to be the most powerful image I have ever collected, was captured at New York City's Ground Zero on December 1, 2001. I find the look on the red-haired woman's face haunting, especially as it is juxtaposed with those that surround her, especially the fellow in the red T-shirt. I wanted to use the image to discuss finding the themes, the important pieces, the points of focus in a still image.

Of course, a significant contributor to the power of this or any image is the place, the time, and the events that surround it. And as I began to talk about the image and its environment, a girl raised her hand and said, "Excuse me, but I don't know what 9/11 is." I stopped, and another child in the class said, "You know, like on the bumper stickers? Lots of cars have them. The two towers got knocked down."

While they discussed it, I was dealing with the fact that I had naively assumed 9/11 had become such a part of our national psyche that everyone knew about it, adult and child, that it is a cultural legend of our time, a story that we all share, part of who we are.

But, no, I was wrong. This young girl and several of her classmates didn't have a clue about 9/11, and even those that did have some sense were not well informed of even the basic facts. The accompanying photograph will be, to anyone, a relatively powerful image of an emotionally isolated individual in a crowd. But lacking context, it cannot be, for the younger generation, the all-powerful image it is to me. I see a woman watching the way her world used to be sliding away, or having already slid away, never to return. They see a lady who is sad for some reason. I must never again take an understanding of 9/11 for granted when I am working with kids.

The second experience happened when I heard a middle school teacher describe how she had wanted to begin doing some blogging with her class but was stymied because the specific tool she was using was acting up. Just as she was about to move away from the blogging and revert to plan B, a girl spoke up and said, "I think I can get it to work."

She proceeded to do just that. Using HTML skills gained at home building personal Web pages, she came to the rescue of the teacher and the class, and the lesson continued. Blogging became part of the way that class now communicates through a teacher's desire to use the best tools and a student's ability to help.

So, here is my question: Have you ever assumed kids couldn't do something and been surprised to find that they could? And how did this realization change what your class or school was able to do? Did a project reach new heights because the kids could? How about technology? Are you able to do some of the things you do with technology because competent kids are part of your support?

I look forward to hearing your stories -- and trust me, I am making no assumptions about what I will hear, so, please surprise me.