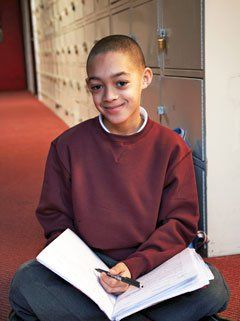 Back in 2007, when then middle school teacher Luke Perry told his students they'd be writing a novel in just one month, he assumed he'd be the taskmaster, forcing them to do something that was good for them. But that's not what happened.

Initially, 12 kids in Perry's sixth-grade class were going to participate. Then the word spread, other teachers liked the concept, the principal gave permission to set aside the regular curriculum temporarily, and 115 kids -- fully a third of the students at Springfield Middle School, an urban school in Battle Creek, Michigan -- wrote novels. Piling into classrooms before school and staying on after, students even skipped lunch to tap away at their stories.

As the literary life took hold, Perry's "taskmaster" role evaporated. He became techno man and chief cheerleader, posting excerpts in hallways, having students read from their novels over the PA system, and, at the end of a frantically productive month, inviting city council members and local reporters to a novel-reading party.

In 2008, some 250 students in the school district participated.

"I can't gush enough about it," Perry says. It was, he contends, the most amazing experience of his ten years as an educator. "I'll never teach the same way again."

He's not alone. He's one of 22,000 students and 600 schools who now participate in the Young Writers Program, an outgrowth of National Novel Writing Month, or NaNoWriMo. In the allotted month, first graders are asked to produce a few hundred words, fifth graders about 5,000, middle school students 10,000; high school students often grind out 20,000-50,000 words. A student wins by meeting the word count he or she designated.

The program is free for schools, which receive buttons, stickers, posters, and access to an interactive Web site intended to make writing fun. And then there's this: Teachers are not expected to grade their students on the content, or even necessarily read what they write.

"It's not about having your work read," says Candace Cunard, a 19-year-old college student and NaNoWriMo intern who wrote novels in high school and continues today. "It's about having written it."

Even enthusiasts admit that everything about NaNoWriMo seems counterintuitive. Reward quantity, not quality? Ignore grammar? Forget spelling? Editing be damned?

National Novel Writing Month was started ten years ago by Chris Baty, a former journalist who jokingly gave his project a grandiose name to encourage himself and his friends to persevere through the low points of "noveling" -- yup, they turned the noun into a verb -- in a month. He confesses that his literary ambitions were not actually to be a novelist, but simply to be able to tell people at parties that he is a novelist. For inciting this global novel-writing jamboree, Baty blames "good friends who encourage my bad ideas." But behind the humor is a dead-serious pursuit.

"It was a dumb idea, but something happened, and we'd never be the same again," Baty says. Something about the compressed time frame turned out to be magical. The inner censor/editor shut down; words flowed. With no time for the doubts of perfectionism, the idea of what was possible expanded.

Baty has never had to market National Novel Writing Month. In its second year, he had 140 people writing novels, and he figured he'd peaked. But in 2001, blogs spread the word, and Baty, who was still processing signups manually, cut off applications at 5,000. Not long after that, he heard National Public Radio announce that November was National Novel Writing Month. "There was madness in the air," he says.

In 2008, nearly 120,000 adults from at least 45 countries became authors. NaNoWriMo has morphed into the largest writing contest in the history of the world, Baty says. The prize for winners? Self-satisfaction and an award certificate in the form of a PDF file -- writers can download it and then type their names into it.

The student program, growing at an equally brisk pace, evolved from teachers wanting to share their novel writing with students. In 2002, then teacher Dan Moulthrop, who was writing a novel in a month, gave his freshman students at San Lorenzo High School, in San Lorenzo, California, an assignment to do the same. "My colleagues looked at me with suspicion," he recalls. They questioned how he could bring "all my kids along on this journey," a valid concern, Moulthrop concedes. Student goals ranged from 3,000 to 50,000 words. Moulthrop found that even kids in the lower-performing half of the class got something out of the experience. "They were less afraid of words, of language, and of writing than they had been," he says.

Eric Juster, one of his students, was 14 when he wrote his 50,000-word novel. That was six years ago. "Even now, as I stare at the three historical research papers that I have to write this month," says Juster, now a student at the University of California at Berkeley, "I think to myself, 'This is nothing. I wrote a 50,000-plus-word novel in a month!'"

By 2004, the Young Writers Program was launched -- and, Baty says, students found that "their relationship to writing and books was forever altered."

Are You There, Oprah? It's Me, Dominique

Today, NaNoWriMo is taught in college courses. Books have been written about how to write a novel in a month, and 27 participants have had their books published, including Sara Gruen, author of the best seller Water for Elephants.

Teacher Salome Milstead wrote a novel before deciding to assign her students that task at San Francisco's Academy of Arts and Sciences; her students, she discovered, weren't intimidated by the idea. "You just set up the opportunity, and the students go for it," she says.

"If you can teach them to silence that inner critical voice so they can get their ideas on paper, then you can teach them to put commas in the right place, restructure it, and find the missing introductory sentence," she said. "That part is easy. The hard part is getting kids who've been discouraged, who've lost internal motivation, to write again."

Michaela Parry pushed herself beyond what she thought possible, writing 50,000 words about a grim reaper of sorts and competing in word count with Milstead. To complete her novel on time, Parry had to convince some of her other teachers to grant her leniency on assignments.

Dominique Martin, another Academy of Arts and Sciences student, says she "felt accomplished that I did it." Her mother, an accountant, was so proud that she brought the 10,000-word novel to work for others to read. Even Martin's little brother, A.J., a fifth grader at another school, aspired to write a 1,000-word "novel."

Ariel White describes herself as "not a big fan of English" last year when she wrote exactly 35,001 words for Milstead's class. The effort gave her the confidence to do well in unrelated subjects, such as environmental science, where before she had been "shaky about things." She says, "I'd recommend doing NaNoWriMo to anyone over the age of 6."

Six may seem very young, but first-grade teacher Lily Jones met with such success in 2007, she did it again in 2008. Her kids at North Oakland Community Charter School, in Oakland, California, insisted on it. Each first grader was asked what he or she was looking forward to this year. One child scrawled, "Be a rock star." But another, Langston, reflected the class consensus when he announced the ambition to "whrit a novl." He'd seen last year's first graders write novels, and now he'd have his chance.

Recognizing the realities of first-grade skills, Jones set a collective goal of 5,000 words. She acknowledges that this is probably a stretch, but her goal isn't word count -- it's that her students become excited about writing. And on the first school day of November, Langston began to write about a family who hop around like beans and "go into a cave of hot lava and have to get past it." Nearby, his classmate Brendan was writing a thriller about a "vakumclyner" that tries to suck letters up.

Because writing can be a lonely experience, NaNoWriMo encourages student writers to work both in their classrooms and at home. The kid-safe NaNoWriMo's Young Writers Program Web site helps combat blue moods and writer's block. Kids can buddy up online, read about "survival tips," or visit forums such as the Plot Hospital and Word Wars. They can post excerpts and confer with their peers about alternative ways to say "he said," such as he "snapped," "muttered," "cried," and "teased" (never mind that professional editors will someday make them go back to "he said").

At the Web site's Character Cafe, student novelists recently discussed whether it was all right to base characters on oneself and one's friends. "Take quirks from real people and it will make it much more believable," one girl wrote. "Then develop and twist them around to suit yourself, and no one will ever know they were based on your science lab partner." At the Names Bank, kids help each other solve the novelist's age-old problem by contributing possible character names.

Well-known writers such as Jerry Spinelli offer tips on how to keep moving forward or how to write great endings. NaNoWriMo has three age-appropriate workbooks that turn the job of writing into an amusement park ride and teach the basics -- dialogue, plot, characters, tension -- and other fiction building blocks.

NaNoWriMo is not without its critics, those who contend it makes a mockery of the serious act of long-form writing. And anyone who writes for a living may be inclined to agree. But for teachers in our word-resistant age, the program offers at least a ray of light at the end of a dim literary tunnel. Founder Chris Baty, who operates out of NaNoWriMo's parent organization, the Office of Letters and Light, and his fans say that those who view the project skeptically misunderstand it.

"They think we're encouraging people to write awful novels," Baty says. "We're trying to get people to write, and to discover that when you keep writing, good things happen."