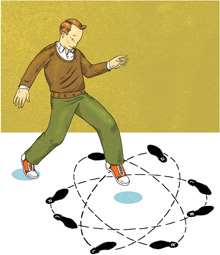 For years, as the creative-schools coordinator of a rural public school, I worked to get the arts integrated into all areas of study. Convinced by all I had read about multiple intelligences that this would result in better teaching and learning, I managed to persuade teachers to open their classrooms to resident artists.

And, as a former chemistry teacher, when I was asked to substitute teach in a high school chemistry course, I jumped at the chance. Despite the misgivings of some of my teaching colleagues, I became the first high school science teacher in the district -- and possibly anywhere -- to share her classroom with a resident artist. For two weeks, I brought in a professional dancer so that we would explore the abstract ideas behind chemical reactions through movement.

We pushed all the chairs to the edges of the room to create space when the dancer arrived. Because he knew no chemistry, my students and I had to explain to him about ionic, covalent, and metallic bonds and the types of chemical reactions. To help him create meaningful movements for the class, he constantly asked the students "why" and "how" -- how electrons behave, how strong one bond is compared to another, what polar means. Listening to the students' answers, I was impressed by their attention to all the details the dancer needed to understand.

This depth of exploration would never have occurred in the regular classroom setting. As one student wrote in her journal, "I had come to hate paper and pencil busywork and had formed a mental block against chemistry that I thought would never change. By applying the arts to our chemistry class, you have temporally erased that mental block."

Another wrote that dancing depicted things that were hard to explain in words. "I was able to think about concepts in a completely different way. Because you cannot actually see what is happening on the atomic level during a reaction, it was helpful to dance it out. Over the days we worked on this, there wasn't one person in the class who wasn't always involved. That's a record!"

The connection between the choreography and the science became very specific. As another student put it, "Now when I think 'double bond,' I visualize how we showed it in our dance."

Students reported that the dance helped them answer questions on the state chemistry achievement exam. They closed their eyes and visualized their dance to retrieve information about chemical reactions.

Besides enhancing the students' understanding of concepts, dance helped reveal their unrecognized talents. One boy had been withdrawn and unresponsive, never entering into class discussions. But when asked to show, through movement, the chemical reaction known as a single replacement, he grabbed two of his classmates to form the covalent bonds of the ion and whirled around the room to find a "metal." Evaluating the day's lesson later, he said, "Dancing helped clear up chemistry ideas that had been hard for me to understand. I also learned not to be nervous in front of people. I think that dancing has helped me be more open and not so shy in class."

A failing student astounded everyone with his remarkable dance intelligence. He was able to repeat a complex twelve-count phrase after seeing it only once. "I really put in an effort to understand the chemistry so I could make a good dance," he explained. Some students worked with first graders, teaching them about chemical reactions and then choreographing and performing with them. A young man said, "I felt empowered because the first graders wanted to hear what I had to say about science."

"This experience showed me that I can learn from doing papers," said another student, "but for my mind to really get a good picture of something, I have to see it displayed, or display it myself."

But there was even more of a dividend, as this boy showed me: "Changing the ways we learn will help us later on, because we will be more open minded."Arts in education is powerful, and it works.

Jane S. Burke, a former science teacher, is the director of the nonprofit Flying Cloud Institute.