When nonteachers ask me with genuine curiosity, “What’s new with teens?” I usually tell them that every school year, it seems like more of them end up in the hospital.

I’ve taught frazzled high-performers who eschew sleep for flashcards and always seem on the verge of a breakdown. I’ve had students who won’t come to school because they don’t want to compound their stress. I’ve heard members of a student panel brazenly explain that they felt burdened by their workloads and simply wanted “the points.” It’s actually become common for student breakdowns to happen and for parents to request their child’s upcoming assignments in advance, knowing they’ll be out of school.

Though it may seem otherwise, my school isn’t a high-stress pipeline for Ivy League colleges, but a diverse public school that is home to both affluent and low-income students. We’re like many other public schools where student stress seems to be on the rise and is putting teachers like me in a tough position, causing us to second-guess ourselves and ask whether students are really too stressed—or just lacking time-management skills and angling for reduced homework.

Yet my personal observations that students seem more stressed than in years prior are backed by research, which shows that anxiety, depression, and self-harm are on the rise among teens. According to a 2019 Pew Research Poll, 70 percent of surveyed teens agree that stress is a major problem. Emergency room visits for self-inflicted, nonfatal injuries among children and young adults increased by 5.7 percent from 2008 to 2015, while the Centers for Disease Control and Prevention (CDC) found that between 2007 and 2017, more teens were seriously considering suicide or hurting themselves in suicide attempts than in past decades.

“I’ve seen an uptick in diagnosable anxiety disorders that almost incapacitate teens,” said Dr. Melissa Holland, a clinical psychologist and associate professor at California State University, Sacramento. “It’s estimated about one in five teens have a diagnosable mental health disorder, and most of them go untreated.”

The problem is real and scary, but what’s to blame?

Two years ago, I participated in a question-and-answer session at a preschool that my spouse and I were considering for our daughter. The head of the school asked parents what they wanted for their children in the coming years.

As the kids were playing just feet away, still in diapers, two parents immediately volunteered that they were eager to see their toddlers get exposure to a STEM curriculum. A third parent raised her hand and said that she wanted her child to be happy. Tellingly, her neighbors, squeezed into miniature wooden chairs like overgrown versions of their kids, looked at her with amusement.

The academic pressures and stress faced by teens today start long before high school and seem to escalate every year. The pressure comes from parents and educators who worry—and make teenagers worry—that they won’t get accepted into highly ranked universities with increasingly prohibitive tuitions or be prepared for a competitive job market once they graduate. 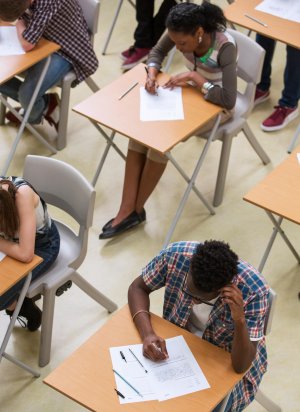 Short on sleep, students reared in the testing-heavy wake of No Child Left Behind (NCLB) enlist SAT tutors, fill schedules with activities and service projects, and take as many honors and AP classes as possible to boost their GPAs. Even with these overloaded schedules, students have no guarantee of getting into colleges—even state institutions—where admission rates keep dropping.

“There are academic and career aspirations, diminishing opportunities and reduced social mobility, and tremendous competition to get ahead,” said Daniel Keating, professor of psychology, psychiatry, and pediatrics at the University of Michigan and author of the 2017 book Born Anxious. “For teens [today], it’s not clear that there’s going to be a prize at the end.”

He explained that students react more intensely when their world feels less stable than they expect—and less likely to reward their efforts and hopes with desired outcomes. For teens in particular, these pressures can be especially challenging to navigate, given their stage of brain development: They simply can’t manage the stress like adults.

They are simultaneously more sensitive and less capable of controlling impulses, said Keating. “The stressors feel even worse [for teens], which leads to behavioral issues, hair-trigger responses, acting out, and an inability to keep things in perspective—or, alternatively, becoming more isolated.”

Students don’t learn in a bubble, though. According to the psychologists and educators I talked to, these academic pressures are compounded for teens by the state of the economy, current events, and unique cultural and social dynamics that previous generations weren’t exposed to.

While the world has never been safe, teens who make up Generation Z—born in the mid-1990s to mid-2000s—now receive constant alarmist reminders online through a personalized I.V. drip of troubling headlines (fake and otherwise).

“The other day, a student told me that the world isn’t safe anymore, with school shootings, terrorists, politics, war, and violence,” said Barbara Truluck, a middle school counselor who was recently named Georgia’s 2019 Counselor of the Year. Her students sometimes erupt with emotion over issues seemingly detached from the school experience. “Kids are processing a constant bombardment of [negative] headlines on a daily basis.”

There are also new terrors—climate change, immigration policy, #MeToo. Truluck’s observations are corroborated by the American Psychological Association’s 2018 Stress in America survey, which found that 75 percent of participants between the ages of 15 and 21 reported worrying about mass shootings, compared with 62 percent of adults overall. With every issue—whether immigration policy, sexual harassment, climate change, or suicide itself—Generation Z members reported experiencing the most stress of any age group. 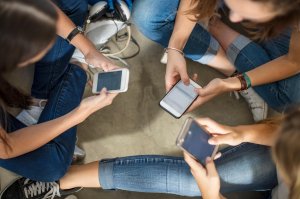 As well as being constantly exposed to negative news online, teens are also engrossed in the digital hallways of Snapchat and TikTok—sometimes so much so that they collide in the real-life hallways of school. Last year, a Pew Research Center study on teen social media use revealed that nearly 95 percent of teens use a smartphone and over 45 percent report being online “constantly,” an increase of over 20 percent since 2015.

Though tech use can have positive benefits for youth, obsessive, always-on media can mire teens in the unhelpful refuge of wide-ranging shallow connections that sharpen existing problems and render them all-consuming—whether it be a conflict with a peer, an unhealthy relationship, or a negative body image. These digital connections can quickly become a substitute for real, deeper relationships that might help teens combat stress or cope with challenges.

Solutions for the World We Have

At the beginning of one school year, a senior asked to speak with me in the hallway. “I want to let you know that I will not be able to turn in all of my assignments,” she said with practiced calm. “I usually let my teachers know so they understand ahead of time—I get really stressed out.” Other students have given similar spiels. The message is that because tasks bring stress, tasks must be removed.

Yet playing whack-a-mole with individual student stressors doesn’t address the big picture. As assignments are whisked from the gradebook to soothe a stressed student, new opportunities to panic will inevitably take their place—so long as no coping strategies take hold.

Of course, schools deserve more guidance counselors and therapists—jobs that are often first on the chopping block with school budget cuts. Students should surely detox from their phones. And the snowplow parent who wades into conferences to do battle on behalf of a kid’s valedictorian chances only delays the student’s inevitable reckoning with the limits of parental power.

By teaching them grit, resiliency, and self-care, you’re teaching a toolbox for any stress they may face.

But for parents and teachers who can’t change circumstances, they can rely on useful solutions that confront the world we live in, including coping strategies that help them address future challenges. “By teaching them grit, resiliency, and self-care, you’re teaching a toolbox for any stress they may face,” Truluck emphasized.

Teachers, for example, can be open to the idea that the way they have always assigned and graded work may aggravate stress without actually boosting rigor. Students also have a point when they complain that teachers don’t communicate enough with one another, which can mean students are faced with completing substantial assignments at the same time.

More holistically, though, social and emotional learning shouldn’t be seen as an add-on in high school, or be equated with a loss of academic rigor and instructional minutes: Self-care can actually become part of the curriculum—as some schools are recognizing.

After losing a student to suicide in his third year of teaching, Roni Habib committed himself to improving the emotional health of teachers and students. Habib said that schools need to make sure that every single kid in a school knows that at least one adult in the school “really sees them” because “it’s very easy for kids to fall through the cracks,” especially as they progress through school and academics take priority.

There’s no reason this type of connection must be informal. Habib suggests figuring out a way to have each teacher shadow a student throughout the day at least once. Habib’s experience following a student from class to class shook him. “By the end of the day, I was exhausted,” he said. “I barely had time to pee or eat.”

Teaching his popular Positive Psychology elective at Gunn High School in the years since has also helped him realize that kids benefit from having time in the day built in, not just for relaxation, but for active healing. Even in the AP Economics course he used to teach, Habib said, he found that incorporating games and mindfulness practices into his lessons helped students focus better and made their collaboration richer.

“What’s more important—for a child to understand an obscure concept in macroeconomics, or be gentle and kind with themselves when they fail so that they can recover and try again and persevere?” said Habib.