On a recent afternoon, Officer Roneil “Ron” Singh drives through the streets of East Oakland, California, headed to nearby Castlemont High School. Singh isn’t an ordinary officer—he’s part of the Oakland Unified School District Police, a team of cops on district payroll who report first to the schools, then to the streets.

En route, Singh passes spots frequented by drug dealers, methodically checks for stolen cars, and listens attentively to a crackly radio. When an emergency call comes through—a suspect in a murder the day before was spotted nearby—Singh flips on the siren and hits the gas.

Boxy, one-story houses and mom-and-pop corner stores whiz by as Singh weaves through traffic at 90 mph before jamming on his brakes in front of an elementary school, just as the suspect is ushered into a cruiser by city police. Residents gather to watch the incident unfold. A woman screams profanities at Singh, demanding to know where the police were when her daughter was shot. A young man bears an image on a lanyard around his neck of a friend or relative who died.

“This is just a typical day,” Singh says aloud before climbing back into his car and driving to Castlemont, a school he’s served for the last five years.

When Singh walks through the double doors at Castlemont, he’ll need to leave behind the morning’s high speed chase and slow himself down. While OUSD cops handle tough situations that can range from verbal altercations to weapons possession and sexual assaults, they’re tasked with much more than providing security in Oakland schools. Using social and emotional learning (SEL) skills like empathy, self-awareness, and communication, officers like Singh are directed to build relationships with staff and students first, asking questions that might give them insight into why a student is upset or disengaged, or what really caused a fight.

This deliberate shift in approach, school leaders hope, will change the dynamics with the police, yielding better outcomes for students and better long-term relationships between cops and communities.

“Conventional police departments can only take a certain amount of time for each call for service, but we’re fortunate to have all the time in the world for our students,” says Sergeant Antonio Fregoso, a former Marine who served in Iraq before coming to the school police in 2009. “I remind the officers every morning, take more time to figure out what’s really going on—find the sources of problems and find solutions.”

The OUSD force started providing SEL training for officers two years ago under the leadership of Chief Jeff Godown, a 36-year veteran who served as a cop in Los Angeles during the Rodney King riots and as the interim chief in San Francisco before coming to Oakland in 2014—the year Michael Brown was shot and killed by a police officer in Ferguson, Missouri.

Viewing the job as his “last rodeo,” the 6-foot-5 Godown quickly discovered that the transition from hard-nosed city cop to school police wouldn’t be easy. Pushback from staff and parents, oversight from administration, and the shift from dealing mostly with adults to dealing solely with minors added new complexities to a job he thought he knew cold.

Though he had seen posters on social and emotional learning hanging on walls around the district, it wasn’t until he heard a presentation on SEL that he suddenly recognized its value in policing. The insight hit him like a revelation. A “light bulb came on,” says Godown, who realized that cops needed training to understand the context of people’s situations and actions, especially when dealing with children in high poverty schools. 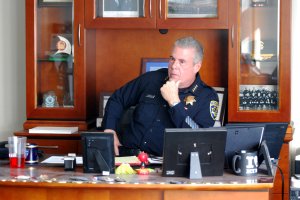 “I started to understand that there are pieces to the law enforcement toolbox that are much more successful than the gun or the Taser or the [pepper] spray you use, and that social and emotional learning piece is a pretty important component,” he explains.

Each summer, OUSD cops and security guards now receive SEL training through the district’s Social Emotional Learning Office on topics like inherent bias, resistance to change, and de-escalation strategies. It can be a steep learning curve for some of the attendees, and the strategies need to be continually reinforced.

In their morning meetings throughout the year, Fregoso and Godown debrief officers about past incidents, combing through the details to determine if they could have handled things differently. The conversations have helped officers seek new tactics for handling high-pressure situations—like a gun on campus—and probe more deeply into the root causes that can incite such situations in the first place, such as trauma or family dynamics.

I remind the officers every morning, take more time to figure out what’s really going on—find the sources of problems and find solutions.

The police training is part of a larger focus on SEL within the Oakland district that started in 2011, driven by research showing that children with social and emotional skills are not only more likely to do better in school, but also have better lifelong success, such as attending college and getting good-paying jobs. 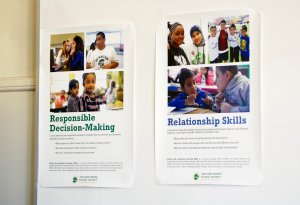 The district believes adults must also learn and develop these same competencies, explains Sonny Kim, a coordinator with the SEL office, which created adult standards for SEL—the first district in the nation to do so.

“Any adult in the school building—teachers, leaders, support staff—has the potential to affect a student’s life,” says Kim. “If we want to see the positive impact of SEL in our schools and classrooms, then adults need to be able to model and practice it too.”

For Singh and other officers, SEL is more than the posters titled “Self-Management” and “Responsible Decision-Making” that line the walls of their station—it’s become an ingrained part of their jobs.

Singh still remembers when he cut out a picture of a police officer from a magazine and proudly displayed it on a poster in second grade. To Singh, who came from a troubled home, when the police were called, “they always made things safer.” But safety isn’t the first thing that comes to mind when people see cops these days, he says. 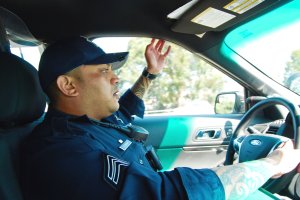 “Wearing a uniform that says ‘Police’ and driving a black-and-white car, sometimes you’re automatically hated. I get flipped off once or twice a day. People spit on the ground when I walk by. I’ve had my car keyed,” Singh said. “I tell them, you’re basing your opinion on some officers that made a bad decision—I’m not that dude.”

In Oakland, as in many communities in the U.S., tensions with local police are near an all-time high. A wrongful death shooting and a police prostitution scandal in recent years have only fueled the fire. The school district itself has a history of taking punitive approaches to discipline. Due to data showing disproportionate suspensions of black and Latino students, OUSD banned “willful defiance” and “disruptive behavior” as categories for suspensions in 2015 and allocated millions to helping schools adopt more restorative approaches. 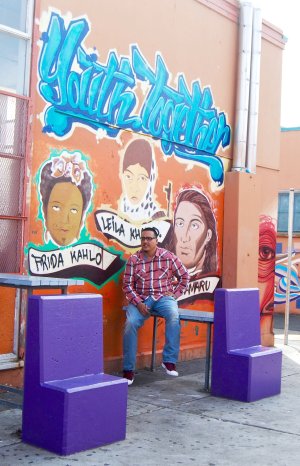 At Castlemont, Officer Singh walked right into the thick of it, explains Francisco “Franky” Navarro, the school’s restorative justice facilitator and baseball coach, who attended the high school himself and still lives in the neighborhood.

Nearly all Castlemont students are on free or reduced-price lunch and are students of color. Many of them grew up seeing cops only in a retributive context and tend to have a negative, visceral reaction when they see police, he says. There was also pushback to having police on campus from staff, who felt it would contribute to the school-to-prison pipeline.

But Navarro sees that changing, a shift he credits to building a network of adults at the school and within the community who work collaboratively to help even the most challenged students succeed. It’s a team that includes an unlikely partner: the police.

“We view Officer Singh as a Castlemont staff member partly because of his efforts to really build relationships with folks here,” said Navarro, who happily shares the success stories of students who once had failing grades but are now A students talking about college. “The approach that we take at Castlemont is a true example of how police and schools can work together, where the focus is not ‘Let me be punitive and let me punish kids,’ but ‘How can I support kids?’” 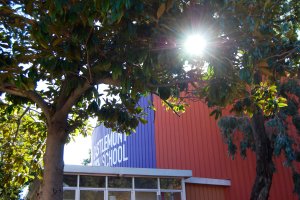 It’s still a work in progress at the school and within the district at large. In the coming months, OUSD faces up to a $15 million deficit and mid-year budget cuts that could mean job losses for school staff (and for officers). Due to financial challenges and high administrative turnover, initiatives like Oakland’s SEL and restorative justice efforts have been implemented piecemeal, with some schools seeing full adoption and others, none.

And while suspensions have declined from 7.6 percent in 2011–12 to 4.1 percent in 2016–17, the newfound emphasis on restorative justice and SEL has also spurred frustration among some staff members who feel it has reduced their ability to manage students.

Countering the narrative about the police involves trying to repair damaged relationships rooted in years of violence and mistrust, according to Singh. It also means showing students that even though he’s a cop, he has empathy and understands other people’s lives.

“It’s tough. You’ve got to gain their respect somehow, and really it’s just day-to-day interactions,” he said. “I try to relate some of my war stories with their current situation like, ‘Hey man, I can help you. I’ve been through this kind of stuff before.’” 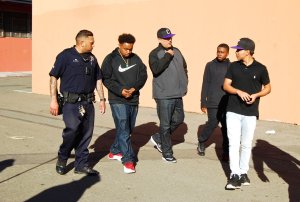 The Castlemont school bell rings, signaling the end of a long day, a Friday right before a holiday break, and students flood the hallway, eager to leave. But Singh’s day isn’t over just yet—he’s slated to provide security support at two football games that evening.

“It’s going to be a long night,” he says, grabbing a can of Coke and a cookie from the staff room before weaving his way through the crowd to the door. Two steps from his car, a student brushes his shoulder and smiles. “Can I have it?” the boy asks, pointing to the can. After just a moment of hesitation, Singh tosses it to him.

As he drives away, a call comes in: A 40-student fight has started at a high school down the road, and he’s needed for backup.

Singh turns on the siren and hits the gas.