In the past few decades, a range of public awareness campaigns have encouraged parents to speak more with their children. “Sing, Talk, And Read (STAR)” to your young child, cheerleads one, and “Talk With Me Baby,” begs another. Almost everyone agrees: It’s good for children to hear parents and caregivers talking.

This consensus didn’t emerge in a vacuum. The public service campaigns are the legacy of a well-known study called Meaningful Differences in the Everyday Experience of Young American Children—more commonly known as the “30 Million Word Gap” study—which concluded that the first three years of a child’s life are critical to advancing their language development and can have long-term impacts on their success in school and in life.

In the 1990s, researchers Betty Hart and Todd Risley studied families from different socioeconomic levels and found that their children were exposed to vastly different numbers of words in their formative years—specifically, 32 million more words for higher-income children than for lower-income children. The variability in exposure accounted for significant differences in children’s language skills when they entered kindergarten, the researchers found, and had a direct impact on how students fared early on in school.

“The problem of skill differences among children at the time of school entry is bigger, more intractable, and more important than we had thought,” wrote Hart and Risley.

In the quarter-century since the landmark study was published, the findings have had a seismic impact on national policies and reform initiatives, which include campaigns aimed at “closing the 30 million word gap,” investments in early childhood education reading programs, and collaborations between the education and health sectors.

But now, the study’s conclusions are contested by recently published research from the psychologists Douglas Sperry and his wife, Linda, which found less straightforward connections between the quantity of words children hear and their family’s socioeconomic background. Their findings have inspired a growing debate around whether biases about race and class influenced the original study’s methodology—and distorted the takeaways.

In the last several decades, the original study has “shaped the way educators, parents and policymakers think about educating poor children. But did you know that the number comes from just one study, begun almost 40 years ago, with just 42 families? That some people argue it contained a built-in racial bias?” wrote Anya Kamenetz, picking up the thread of the argument in a National Public Radio (NPR) article that went viral.

So what does this debate mean for the consensus that was built around children’s language development over the past two decades?

A Look at the Methodology

Starting in the early 1990s, a group of researchers led by Hart and Risley tracked 42 Kansas families—13 wealthy, 10 middle-class, 13 low-income, and six on public assistance—from the time their children were 7 to 9 months old until they turned 3 years old.

Every month, the researchers visited the families and collected data for an hour on the adult-child interactions they witnessed. Observers recorded the families’ spoken interactions and took notes on the contexts for communication, guided by questions such as: Did caregivers participate in their children’s play? How often did they speak with the children? How often did they encourage or reprimand? 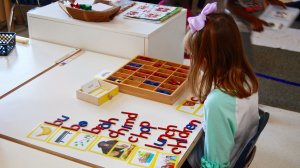 After analyzing the resulting 1,300 hours of observations, Hart and Risley determined that an average child in the wealthier families heard more than 2,000 words directed their way during that hour of observation, while an average child in a family on public assistance heard closer to 600. By the time the children turned 4 years old, the researchers calculated, these differences in spoken language resulted in a gap of around 32 million words.

As an extension of the study, the researchers also continued gathering data on some of the children from the initial study as they got older, finding that the children’s early language abilities predicted better language skills in elementary school. A later analysis backed those findings up, showing that children who had been exposed to more words early in life were more likely to have stronger language comprehension skills in kindergarten and greater vocabulary growth through elementary school.

New Questions About the Research

But critics of the 30 Million Word Gap warn that the study’s sample of families was far too small to sustain the movement it spawned. They point to issues like the fact that only 29 of the initial 42 families were tracked as their children entered elementary school. In addition, critics like the Sperrys question whether there were larger issues of bias and systemic inequities at play that influenced their interpretations.

Critics like Sperry and others also argue that the study favors White, upper- and middle-class speech norms and focuses exclusively on conversations between parent and child that do not account for cultural differences in how families interact and communicate. “We should be acknowledging up front that there are political differences and power differences between the language dialects that are spoken,” said Sperry, who says the word gap study’s cultural bias undervalues speech activities in diverse families.

For instance, while children appear to benefit from direct interactions with their parent or caregiver, there may be other linguistic skills to be gained from participating in different kinds of speech. To that end, in their recent study, the Sperrys tried to capture a wider language context for the young children in their study by measuring “bystander speech,” or conversations within children’s earshot that weren’t directed at them.

Even that idea is contested turf, though. University of Delaware education professor and psychologist Roberta Golinkoff, lead author of a viral article defending the 30 Million Word Gap in the wake of the publication of the Sperrys’ study, argues against including overheard speech in word gap calculations. “Young children are not capable of picking up that much from overheard speech,” says Golinkoff, who has written a number of books (including a best seller) on children’s language development. “You have to know more language to be able to do that.”

A Story of Deeper Inequities

But critics of the original study and the movement that built around its framing generally agree that adults can boost the development of children in their care by speaking with them—and the bulk of research agrees.

A 2017 study collected speech data on 329 families using automated recorders tucked into children’s clothing and found some gaps in children’s early language experiences that were similar—but not identical—to the original 30 million word gap. Meanwhile, a 2018 study led by researchers at Harvard and Massachusetts Institute of Technology (MIT) used MRI technology to track how children’s brains reacted while they listened to stories. They found that young children who had more frequent conversations with their caregivers had different neurological patterns than peers who didn't.

Research likewise shows that these early language development skills are important for children’s longer-term academic success. A 2007 study found that gaps in children’s language abilities in kindergarten account for the majority of the achievement gap between children from families of high and low socioeconomic status. And there has also been significant research linking early interventions like quality home visiting programs, child care, and pre-K with improved early language metrics and better long-term outcomes for children.

Yet Sperry and others emphasize that the research on language gaps in the early years can miss more fundamental takeaways about the deeper racial and economic inequities affecting a child’s life living in poverty, referencing a body of research building since the 1960s that shows that a family’s socioeconomic status and parental education levels heavily shape children’s learning.

Indeed, researchers who defend Hart and Risley often agree and generally urge policy makers to do more than fund public service campaigns. Public policy needs to aggressively confront the deeper structural challenges that families face, while continuing to help adults understand the power of engaging in early conversations with young children. “There are horrible and remarkable inequities in American society,” says Golinkoff, underscoring the point. “We will not be able to address things like the word gap with palliative kinds of intervention until we do something about these inequities.”