It’s a crisp fall morning, and Superintendent Nick Polyak is driving through the suburbs outside Chicago on his way to work at Leyden High School District 212, talking into his cell phone like it’s a walkie-talkie.

“What’s the one app you use to make your life easier as a superintendent?” Polyak asks aloud, recording himself using Voxer, a smartphone app that enables users to communicate with groups of other users through short recorded messages.

Within minutes, he has responses from his network of hundreds of other school administrators across the country who, like Polyak, are now looking outside their districts to help navigate the fast-paced changes in education technology and the pressure to make smart decisions about its use. 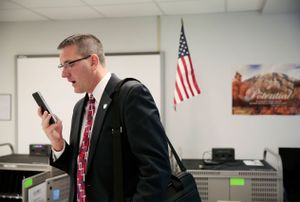 While school leaders have traditionally networked during professional conferences, today’s relationships have grown deeper and more regular with the growing array of ways to connect. Through social media, online networks, technology associations, and school tours, administrators are increasingly linking up and crowdsourcing solutions with other education leaders throughout the nation. 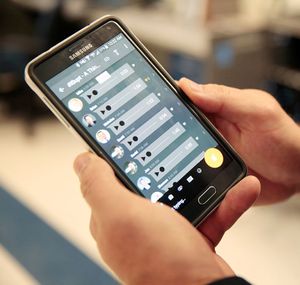 “There’s been a shift that has occurred because of a recognition of where the expertise lies,” confirmed Mort Sherman, the associate executive director of the American Association of School Administrators (AASA). “It’s not with the universities or the government researching education technology, but with the superintendents and staff in school districts doing the actual work.”

Five years ago, after observing the country’s first district implementation of a one-to-one technology program (one device per student) during a school tour in Mooresville, North Carolina, Leyden district administrators were inspired to replicate the model in their own schools. In 2012, Leyden became one of the first three districts in the nation to go one-to-one with Google Chromebooks—a catalyst for other innovative technology practices throughout the district.

Soon Leyden 212 began making a more conscious effort to strategically integrate technology throughout the schools, according to Polyak, who took the helm as superintendent a year later.

After realizing that a number of students were doing their homework in the hallways long before and after school because they didn’t have internet access at home, the Leyden district applied for a grant to get students connected to free hotspots at their homes and started selling used Chromebooks to families for $30. To enhance classwork, teachers at every grade level were trained to use a range of tech tools like Google Apps and VoiceThread, an application that lets users add audio comments to documents and multimedia.

To prepare more students to enter the workforce with 21st-century career skills, Leyden schools also established student-run help desks through a class called Tech Support Internship (TSI). In TSI, students learn to address 90 percent of the technology problems their teachers and fellow students encounter, saving the district money on repairs and staff and earning themselves a certificate upon completion that helps them get jobs in the community.

The education world was watching. Alerted to the district’s success over social media and via professional networks, education leaders around the country began asking to come see the Leyden schools in action. Unable to accommodate the high demand for individual tours, the district adopted a pay-it-forward mindset and opened its schools for scheduled group tours, just as the Mooresville district had done for them. 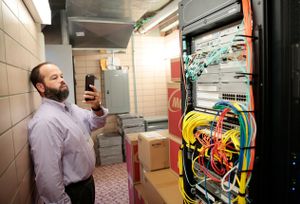 “In the old model, you went to conferences, as opposed to going to the place,” Polyak said, underscoring the transition from formal to informal modes of networking. “When you’re there on a tour, you can ask, ‘What operating system are you using? What do you do when the device breaks? What do you do when a kid misuses it?’ That’s the magic.”

To date, more than 3,000 educators—an astonishing number—have toured the district’s high schools on site visit days and during its annual summer symposium. Many of those educators have replicated versions of Leyden’s technology strategies, like the help desk, in their own districts.

When he’s not attending or giving school tours, Polyak regularly asks questions and swaps ideas with other administrators via social media, email, and text messages. On the first Wednesday of every month, he and other superintendents around the country connect using the Twitter hashtag #suptchat (or on Saturdays using #Satchat) to discuss topics ranging from feedback on new apps to new education books and articles they recommend reading, Polyak said.

Technology-focused coalitions organized by national and regional member associations, corporations like Google, and nonprofits have also been integral in fostering some of these connections among administrators.

Digital Promise, a Washington, D.C.–based technology organization, runs a national network of tech-savvy leaders known as The League of Innovative Schools, for example. The League helps members pilot new tech programs in their schools, meet information technology (IT) developers, and troubleshoot challenges in their districts.

Participants, who connect virtually and in person, are selected through an application process. One of the League’s goals is to serve as a test bed that exposes leaders to new approaches of instruction using technology, while helping them navigate challenges like budgeting, training staff, and assessing impact.

League member Susan Enfield, the superintendent of the 19,600-student Highline Public Schools district outside Seattle, says the interactions with her peers helps alleviate the stress of making tough decisions about a resource that is still relatively new and constantly evolving.

“Being a superintendent can be a lonely job. There’s only one of you in a district, and there is no way you can keep on top of everything,” said Enfield, comparing new software and gadgets with the multiplying aliens called Tribbles in Star Trek. “Given the fast-paced changes in technology, being part of a network is now part of survival.” 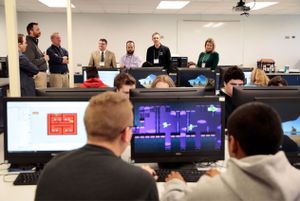 Enfield says her role as a school administrator today is to serve as a “broker of innovation and opportunities” who connects people and ideas. Meeting other education leaders throughout the country through networks like the League has helped her vet new software, as well as kept her informed of successful strategies to replicate in her own district.

This feedback has influenced projects like training the district’s librarian—whom Enfield calls “the MacGyver of boxtops and string”—to run a makerspace, and developing a chapter of the national after-school club Girls Who Code. It also led to the establishment of a core group of Highline teachers who pilot new tech tools and strategies and then train other teachers on how to use them.

Being a superintendent can be a lonely job. There’s only one of you in a district and there is no way you can keep on top of everything. Given the fast-paced changes in technology, being part of a network is now part of survival.

Both Enfield and Polyak are also members of the Digital Consortium, a cohort organized two years ago by the AASA. The 40 members get together—both virtually and in person—to visit innovative schools and brainstorm tech strategies to execute in their districts.

The group recently convened for three days in Napa County, California, where they toured several tech-forward schools, discussed topics like coding classes and the bring your own device (BYOD) model, and heard from vendors like Discovery Education and Google. Discovery Education, which provides digital content to half of U.S. classrooms, is now helping school leaders integrate innovative technology practices in their schools through a program called Digital Leader Corps.

While some administrators are using the new opportunities to meet leaders throughout the country, others, such as Fleming County Schools Superintendent Brian Creasman, say they prefer to develop connections regionally with districts with similar demographics and needs.

Creasman says he regularly uses Twitter and Connect—a custom online portal for administrators run by the Kentucky Association of School Administrators (KASA)—to find other superintendents who make technology decisions for smaller, rural districts that also have tight budgets and spotty access to the internet.

Creasman and his peers discuss these needs during site visits of schools in the state and through the Kentucky Educational Development Corporation, a local cooperative of school districts whose members jointly negotiate with vendors to reduce costs for education technology.

Through his doctoral research at Columbia University and experience as a tech specialist at the Fieldston School in New York City, Kenny Graves has found that the partnerships among school leaders are also helping them think more strategically about how to use technology as a tool to address specific needs and goals in their districts.

Rather than rushing to purchase the next tool or device, as many did in the past, leaders are now having more collaborative discussions about their visions for their districts first, according to Graves, who pointed to research conducted by Scott McLeod, Jayson W. Richardson, and Nicholas J. Sauers. 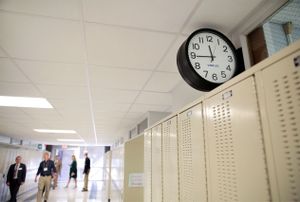 The shift in how administrators make decisions mirrors a broader social change also apparent in media and politics, where technology has toppled top-down structures in favor of informal networks of experts and practitioners. It also suggests more transformative changes for how leaders will make decisions in education and other fields in the future, according to Graves.

After all, “computers are just a tool, but they can be a catalyst for deeper discussions around curriculum, instruction, social equity, and assessment,” Graves said.

Superintendent Dallas Dance of Baltimore County Public Schools says his vision for technology integration continues to evolve, driven by a “culture of risk taking” and support from his peers.

School districts have to center themselves first and have a vision in the classroom. If not, everything becomes the shiny new gadget. That should never be how you look at technology.

Dance uses the tours of his 112,000-student school district both as an opportunity to share the district’s successes, like its mobile makerspace bus, and as a way for his staff to learn new tricks from the educators who attend them. He also continues trying out new strategies through his Lighthouse Schools, a group of schools that pilot new technology devices and initiatives, like a tech-driven personalized learning program, before they are implemented in all schools throughout the district.

“Education technology can be overwhelming if you allow it to overwhelm you. School districts have to center themselves first and have a vision in the classroom,” said Dance. “If not, everything becomes the shiny new gadget. That should never be how you look at technology.”