When I taught second grade, I had a student who absolutely hated reading. He’d made the decision that it was simply too boring. While his peers were busy devouring books, he’d spend his time distracting them, being silly, finding other things to occupy his time.

That changed when we started reading Mo Willems’s We Are in a Book! I voiced the part of the elephant, Gerald, and he took the part of the pig, Piggie—good pals who come to realize that they are, in fact, in a book, and have the hilarity-provoking power to control what the readers say.

Something about that dynamic must have been thrilling to my student, because We Are in a Book! turned him into a reader. It dawned on him, I think, that his own desire for silliness and play could be fulfilled in a story.

My second grader’s experience isn’t unusual. Young children around the world are drawn to the distinctive voice and visual style of Willems, who spent years working for Sesame Street before going on to write and illustrate dozens of books, winning three Caldecott awards along the way—for Don’t Let the Pigeon Drive the Bus!, Knuffle Bunny: A Cautionary Tale, and Knuffle Bunny Too: A Case of Mistaken Identity.

I recently had the opportunity to talk with Willems about the inherent power of drawing, why adults should consider undergoing “shame-ectomies,” and why he’s always on the side of the kids. Our conversation has been edited for length and clarity.

EDUTOPIA: You seem to have unique insight about what young children crave from their reading experiences.

MO WILLEMS: I don’t think I’m more unique than anyone else. What I want to bring to the table is a respect for kids by creating 49 percent of the work and leaving enough space for my readers to create the remaining 51 percent. When people are engaged and actually have a part to play in the story, the story means more. So, for instance, in Don’t Let the Pigeon Drive the Bus!, the audience is never instructed to say “no.” The fun is in having to figure that out.

For me a good book is a question, not an answer. It’s about asking fundamental questions: What is friendship? Why are people the way they are? How do you talk to somebody about how you don’t like what they do? Why can’t I drive a bus? If you create a book with the answer, it’s already ruined, because then you’re just writing an instruction manual.

EDUTOPIA: And what’s the big question behind, say, Don’t Let the Pigeon Drive the Bus!?

WILLEMS: Besides the intricacies of bus driving? Well, the “meaning” is going to be different for me than for the audience, but that doesn’t mean I’m right. For example, The first two reviews of Don’t Let the Pigeon Drive the Bus! were, “It’s a great book because it teaches kids never to give up and to always struggle and try to achieve their goals.” And the next review said, “What’s great about this book is it teaches kids the value of the word ‘no’ and knowing when to stop.” And both those reviews are right!

EDUTOPIA: You’ve talked about how grown-ups are a crucial ingredient to the experience of literature for young kids. Can you elaborate on that?

WILLEMS: I think with the grown-ups what I’m trying to do is encourage a full shame-ectomy. Embarrassment is a learned disease that begins to manifest itself in early adolescence. By adulthood, it can have ossified your entire spirit. A saving grace of having kids is that for the first time—in maybe a very long time—there’s permission to be silly. I encourage that.

If you claim that being creative—by writing, drawing, or singing songs—is important, then you have to do those things. Otherwise, you’re lying and kids smell a lie. A lot of my work over the last couple years has been trying to create situations that allow the grown-ups in kids’ lives to be sillier by doodling, drawing, and demonstrating the joy in the creative process. If I’m doing a drawing demonstration, it’s for everyone, because drawing is a physicalized form of empathy—and who can’t use a bit more of that?

EDUTOPIA: How do you come up with a premise like a pigeon who wants to drive a bus? How do you know it will work?

WILLEMS: You don’t have ideas. You grow them. It’s an inordinate amount of work. It takes patience and perseverance; there’s a lot of experimenting and a lot of failing.

I started out in stand-up, and then in television. So, I’ve written many, many hours of television and created many, many films and performed on many stages.

Consequently, I have developed a sense of what doesn’t work. Think of being a writer or a humorist as being an athlete—someone who practices consistently to figure out what doesn’t work and then tries to avoid doing that. After decades of doing this, I have a sense of what isn’t funny. All I have to do is take out the not-funny bits and trust that whatever’s left works.

EDUTOPIA: It seems like a lot of the premises of your books are so ridiculous that only a child could’ve come up with them.

WILLEMS: Not to the characters. To the characters, they are deadly real situations, and they take them very, very seriously. If you were to take The Pigeon and explain to him that people were laughing at him while he’s trying to figure out how to drive a bus, it would make it even worse! Bus driving is life and death for him.

EDUTOPIA: You’re right. When I taught writing to young children I was always so impressed and charmed by their stories. Do you have suggestions about how teachers can help children cultivate that kind of imaginative sensibility in their own writing?

WILLEMS: That’s a good question, but it’s hard for me to answer because I’m not an expert. I can tell you what I do. All of my characters are specifically designed so that a 5-year-old can reasonably copy them, and I’m being intentional in creating that scaffolding. As a young child, I started out drawing Charlie Brown and Snoopy and using these characters that weren’t mine to explore funny new gags or little bits of stories. From there I tentatively created my own characters.

So, I love the idea of kids repurposing my characters as stepping stones. If they can take The Pigeon and recreate a pigeon story, that’s a lot easier than starting from scratch: that kid know how The Pigeon looks, they know his basic personality traits.

EDUTOPIA: Your books tend to be a lot of fun, but they don’t shy away from unpleasant situations and emotional extremes. Why do you approach scary topics and negative emotions head on?

WILLEMS: It is my sincere belief that childhood is an inherently difficult time. Even a good childhood is hard. You’re new. The furniture is not made to your size. You have no agency. As a grown-up, every morning when you wake up and pull out a mug to pour your coffee in, that’s your choice. You choose which mug to pull out. Imagine waking up first thing in the morning and someone three times as big as you just replaces it, forcing you to drink out of a mug that maybe you hate and ignoring your reasonable mug preferences? That would be incredibly frustrating, right? And if your whole life was that over and over every single day, of course you would need frequent naps!

EDUTOPIA: [laughs] Sure. Do you think there are ways that society underestimates young kids?

WILLEMS: I think that society does not demand enough of the grown-ups in the world to model empathetic and creative behavior. I think that grown-ups say terrible things like, “I can’t draw,” and then don’t understand why kids put down their crayons.

There’s no such thing as a “wrong” drawing. It’s an experience! Drawing is physicalized empathy.

At my home, we roll out a big block of butcher paper on the dining room table and we draw after dinner. Guests, too! Everyone does their own thing: some draw realistically, some cartoony, some abstractly. My father-in-law creates these wildly colored spreadsheets. Awesome!

This activity, it’s an hour without screens. It’s talking at the table. One of the best parts of life is being with other people and communicating with them and sharing with them. The idea that you get to do that and make marks on paper is incredible!

EDUTOPIA: How about as writers? How do kids learn to use words in the same way that they use drawing utensils? 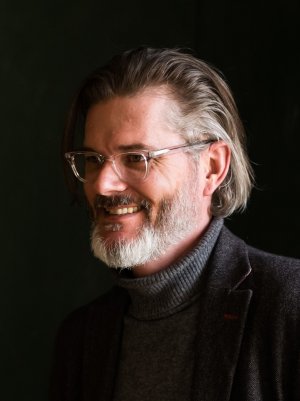 WILLEMS: I think it’s a mistake to assume that drawing or doodling isn’t a form of writing—I think drawing is a very accessible form of writing. Many writers use storyboards or make maps or sketches, even if they’re only writing prose. There’s an inherent value in drawing that’s really powerful.

Children tend to draw chronologically, which is to say narratively. They’ll start with, “Oh, I’m going to draw a character. Now, is it a hero or a villain? It’s a villain. Well, if it’s a villain, it has a cape. And if it has a cape, it can fly. Let me draw the sky.” And all of that story comes out of having a drawing utensil in your hand. It’s magic.

And anything can be a story. It is intentional that nothing “big” happens in the Knuffle Bunny books. Going and doing your laundry, which seems like it’s not special, is in fact worthy of a book, it is in fact a dramatic story. Because in those moments where nothing happens, everything happens.

So, that’s a framework to try. Start out with a simple something like: “I’m gonna tell the story of the day I walked my dog,” and let that be a spark for something that really has value.

EDUTOPIA: Of course, I told all the fans of yours in my life that I was going to be talking to you and asked them to ask some questions. Is it OK if I pass on a few of them?

EDUTOPIA: Do you relate more to Elephant or to Piggie?

WILLEMS: I aspire to Piggie-ness and am regretfully more Elephant-ine than I want to be—and thankfully less Pigeon-y than I once was.

EDUTOPIA: One more: Who was your favorite author when you were growing up?

WILLEMS: The big influence on me was “Peanuts,” by Charles Schulz.

If I can talk to the teachers right now, I get great joy when I see teachers all over the country teaching kids how to make word bubbles and how to be expressive with dialogue and type size and fonts because when I was a kid in school many, many years ago, my art teacher would throw away my cartoons and say they didn’t have value. I am so glad those days are over. I like to think that my work has been a small part of that change. If I could be proud of one thing in my career, it would be that.