With a no-zero grading policy, the glass is always half full.

The controversial grading policy—which is rising in popularity across the country—sets the lowest possible grade for any assignment or test at 50 percent, even when students turn in no work at all.

Schools systems like Fairfax County Public Schools and the Philadelphia School District have adopted similar approaches in recent years, arguing that they give all students a chance to succeed. These changes in grading policy are moving in tandem with national efforts to abolish letter grades and minimize the value placed on AP exams and SAT scores in favor of assessments focused on students’ skills, competencies, and work samples.

“I think grades oftentimes become an indicator of ‘completion’ and not necessarily a movement toward proficiency of content standards,” Jennie Frederiksen wrote on Facebook. “Teaching is hard work. Let’s have grades that reflect actual learning.”

But others feel differently. A no-zero grading policy allows students to do minimal work and still pass, pushes students forward who haven’t mastered the content, and doesn’t teach students the real-life consequences of not meeting their responsibilities, according to many of the 300 members of the Edutopia audience who reacted to our Facebook post “Is Our Grading System Fair?”

“We are creating a generation of entitled people who are hitting the colleges and the job market with major holes in their abilities to survive,” wrote Tom Bannan on Facebook, reflecting on the lack of forgiveness for poor or unfinished work in real-life work environments. And the actual cause of failing grades isn’t tough grading systems or pitiless educators, according to many who joined the Facebook thread. “Zeros don’t create holes,” said Lara Morales. “Kids choosing not to do their work creates holes.”

For many in favor of a no-zero grading policy, it comes down to equity. Many educators argue that home-life factors create barriers to student learning, that low grades encourage struggling students to give up, and that teachers who can’t get their kids to comply use grades to punish rather than to assess knowledge.

There are a wide variety of home-life factors—like learning disabilities, learning English as a second language, or working a job to support their families—that impact students’ abilities to succeed academically, teachers noted. If a student misses a major assignment or assessment due to a home-life situation and receives a zero, that’s much more difficult to come back from academically than a 50.

“I work with students that don’t always know where they are sleeping or whether they will be eating when they go home,” says Polly Pennington Wilson. “Sometimes there are outside factors that affect student success. Grades run second to those concerns.”

But the equity argument was just one dimension of the criticism leveled at zeros. A significant number of teachers simply considered it draconian arithmetic—a grading strategy that, once triggered, torpedoed any record of progress and learning across the remainder of the grading period.

“If you are using a 100 point system, 0’s are unfair,” said Edutopia audience member Stephan Currence. “Which student has demonstrated greater mastery: student A: 100, 100, 100, 100, 0, or student B: 75, 80, 90, 80, 90? Mathematically, it is student B with an 83 average, but student A has clearly demonstrated greater mastery.” Even demonstrating consistent mastery for months can be undone by a single zero, in other words, and for many teachers that feels unjust. 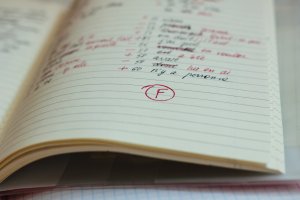 Still, some educators assume that giving very low grades—zeros, in some cases—communicates to students that they need to work harder. That’s not how students see it, explains Sarah Duncan, the co-director of the University of Chicago’s Network for College Success, an organization that works with high schools to improve grades and graduation rates for entering freshman.

“Instead of working harder, the vast majority of students who get an F tend to withdraw, try less, and come to school less because they’re taking an F for what it actually stands for: failure,” said Duncan, refuting the argument that zeros create greater accountability in students. “They interpret an F as ‘You do not belong in this environment.’”

The research tends to corroborate that perspective: According to a 2014 literature review that explored the history of grading spanning almost 200 years, grades increase anxiety and decrease the interest in learning for students who struggle.

Finally, a few teachers worried that no-tolerance grading policies are often used as a classroom management strategy—and they’re the wrong tool for the job. “I feel like teachers are not being equipped with the tools to address behavior so they are using grades as a way to try to get kids to comply,” said Currence. “This does not help the child, or parent, understand where they are in terms of learning and what is necessary academically to succeed.”

Several of the educators participating in the conversation had direct experience with no-zero policies, however, and felt that in practice they simply didn’t work well.

“[Our 50 policy] had unintended consequences that undermined instruction. Many students learned to subvert the system and would do nothing two quarters [of the] year, collect their 50s, and do well during the next two quarters and on the final,” said Rachel Kent of her school’s adoption of the policy. “In essence, they were smart kids who didn’t want to do the work (or didn’t want to come to school) and knew they could take half of a year off and still pass.”

The same logic drove Leominster Public Schools in Massachusetts to rescind their no-zero grading policy. “We really felt that after years of doing it that way, kids just weren’t learning to be responsible,” said Sky View Middle School Principal Tim Blake, as reported by the Sentinel & Enterprise News.

While teachers who spoke in favor of zeros recognized that the grade can dampen enthusiasm for learning, they suggested that no-zero approaches had a similar effect—with potential long-term consequences for students.

According to these educators, a no-zero grading standard allows students who haven’t mastered the content to slip by, and then move on to increasingly harder subjects, the next grade level, or even to college completely unprepared, putting students in a hole they might never climb out of.

“Why boost a kid’s GPA when they clearly don’t know the subject and lack determination?” said Alo Torres. “If they aren’t ready for the next grade, let them fail. It isn’t a punishment. On the contrary. It is help. It is making sure a child will be successful by not just passing them along before they are ready.”

According to Christina Arenas, a community college professor, high school students are often shocked when they get Ds and don’t move on or coast through. “If your boss gives you a deadline and you miss it, what happens?” asks Arenas. “At some point, our job as educators has to be to prepare them for the real world.”

Maybe It’s Not a Zero-Sum Game

Given the complex range of factors to consider, perhaps both strict pro-zero and no-zero strategies are too inflexible. Giving students productive feedback requires nuance—all children are different.

Already, there is evidence that teachers are starting to find their way back toward the middle. According to our audience, some educators in schools with a no-zero policy give a slightly higher grade to students who put in effort. Teachers with more flexibility say they give slightly lower scores to students who don’t try at all. Others put students’ original scores on their papers, but mark 50 percent in their gradebook so students and their caregivers know the grade that reflects their actual understanding.

To help him remember the reason behind every 50, Jimmy Araujo, a high school biology teacher, uses place markers in his gradebook to note distinctions in student performance.

“NM stands for non-mastery. AB for absent. NHI for not handed in regarding homework assignments. DNA for did not attempt,” Araujo wrote on Facebook. “These allow me to communicate to students and parents better to distinguish where the student needs help.”

Overall, according to the experts, neither no-zero nor zero policies are silver bullets. Grading is more about the feedback provided and expectations set by the teacher to contextualize the grade.

“If you hand me an essay that’s really lousy, do I say ‘F, do better next time,’ or do I say ‘I’m not going to grade this. I expect a much higher quality of work from you. I wrote comments on it. Come to my room at lunchtime, and we’re going to work on it together, and then I need you to turn it in next week,’” Duncan said.