Holding the 10-year-old boy by the hand, occupational therapist Krista Stephens leads Joshua into her classroom, where a two-foot-tall talking robot awaits them.

“You ready to work with Milo?” asks Stephens, guiding Joshua to a seat at a small table where he and Milo the robot practice standard greetings and social behaviors that would seem basic for most children—but not for kids with autism. “Say hi to Milo,” Stephens prompts, as Joshua reaches to touch the robot’s hand when it waves to him, then mimics the wave with his own hand. “Say hi to Milo,” Joshua repeats.

Fourth grader Joshua is one of 10 autistic students working with Milo at Lester Elementary, a 445-student school in Florence, South Carolina, where one in four students is autistic. Sixteen districts in the state are test-driving Milo as part of a three-year pilot with the state Department of Education that will determine if there’s enough student benefit to bring the robot to more schools.

Released in 2013 by RoboKind, Milo features voice-activated lessons that aim to bolster autistic students’ communication, social and emotional, and behavioral skills. Alongside an educator, students work through modules like identifying emotions and expressing empathy following Milo’s verbal prompts and facial cues. In a session, Milo’s face moves through a range of expressions—angry, sad, happy, frustrated—while his head and boy-like body turn from side-to-side; sometimes, he even dances for correct responses.

Assistive technology like Milo is becoming increasingly commonplace in schools as educators grapple with new ways to help autistic students who struggle to communicate with people, but seem to interact more easily with technology. Early studies have found that tools like robots can pique the interest of autistic children, improving engagement in therapy sessions and teaching them skills and behaviors that they apply in everyday situations—and, in some cases, with the people in their lives.

“The benefit we get with technology is that we’re bringing something into a child or young person’s world that actually works for them and with them,” said Sue Fletcher-Watson, a senior research fellow at the University of Edinburgh in Scotland, who conducts research on tech-based interventions for autism. “It isn’t constantly making demands on them to be more like us, to be less autistic.”

‘It Won’t Work for Everyone’

A small city of 38,000 people, Florence is just over an hour from Columbia and two from Charlotte, North Carolina. Self-effacing locals jokingly tell visitors it’s near South of the Border, a kitschy old roadside attraction that hugs the North Carolina–South Carolina state line.

While suburban development and big-box retail ring the city, Florence’s downtown is starting to hold its own, says Cassandra Guerrero, Joshua’s mother, who is helping some of the fledgling businesses with their social media marketing. Guerrero, a single parent, says the flexible hours she has while working from home help her care for her son, who was diagnosed with autism at the age of 3.

“He was progressing normally, if not advanced, up until his second birthday, and then like clockwork, it just stopped,” said Guerrero, who is also autistic. “I started seeing a lack of eye contact, a lack of speech progression.”

The onset of Joshua’s autism at age 2 to 3 isn’t unusual—it’s a common age for the diagnosis and represents a critical window for intervention. Since 2004, the number of children diagnosed with autism has more than doubled to one in every 59 children, according to the Centers for Disease Control and Prevention (CDC). That dramatic increase has been followed by an equally rapid influx of tech-based tools to assist autistic children. There are now glasses that read facial expressions, virtual and augmented reality experiences, text-to-speech and speech-to-text devices, and hundreds—if not thousands—of apps.

The encouraging news comes with a catch, though: The speed with which technology is released is far outpacing the speed of research, says Matthew Goodwin, a researcher and associate professor at Northeastern University. That leaves a lot of unknowns about the effectiveness of particular tools—including robots.

So far there are promising studies showing that tech tools like Milo can improve autistic kids’ communication and engagement. A study released last summer by Brian Scassellati, a Yale University researcher, concluded that autistic children who used a robot in home-based therapy sessions for a month improved their eye contact, social skills, and interactions with a parent or therapist, for example.

But Goodwin notes that a lot of the research on tech-based autism interventions uses small sample sizes and focuses on autistic children who have more advanced social skills and “can cope with being in a strange place with strange people for ill-defined periods of time doing tasks they’ve never done before.” The research is lacking on children who struggle and need interventions the most, he says.

“The science is really still quite young on autism, and it’s a very complicated condition—there are a lot of individual differences among the population,” said Goodwin. “Saying any one thing is going to work for everyone—I guarantee you it’s not going to.”

Researchers suggest that it’s often a trial by fire for parents and educators who must try a number of things before finding something that works—if they ever do. Regardless of the tool or approach, tailoring services to each child’s interests and needs is typically the best strategy.

At Lester, Joshua has been fortunate to access a range of supports, including one-on-one instruction, speech therapy, social skills training, and access to Milo, which he started using in weekly sessions this school year. Among students using the robot at Lester, parents and educators report overall improvements in the students’ time on task, self-regulation, and communication skills, though gains differ by student.

“We’ve seen students respond to Milo where they might not respond to another adult,” said Brian Denny, the district’s director of programs for exceptional children, who attributes the robot’s impact to consistency and repetition—two things that research shows autistic children respond to well. “Children with autism, they pick up on human affect, on the inflection in voices, but the way Milo responds doesn’t change.”

Already, Guerrero says she’s noticed Joshua using more complete sentences—rather than resorting to one- or two-word phrases or pointing at pictures to make a request. Parent Audrey Hartley says her 6-year-old son Nathaniel’s speech has “improved drastically,” and that recently she’s noticed that “he’s starting to understand his emotions.”

But due to the limited research on tech-based interventions, there is some skepticism about the capabilities of assistive tech tools like Milo to treat children with autism. On the practitioner side, there is also concern among educators about gradually being replaced by automation, while others may fear that the technology will rapidly advance beyond their training.

The assistive products don’t come cheap, either—Milo retails at around $7,500, and the software the robot runs on needs to be regularly adapted, making it an expensive acquisition for cash-strapped school systems.

In New York City’s District 75, a 25,000-student district composed entirely of special needs students, staff have sometimes found that simpler, highly adaptable tools like iPads work best, according to Leslie Schecht, the district’s director of technology. Schecht—who emphasizes that technology has been a critical resource in helping her district’s students communicate—warns districts against buying the latest shiny new toy.

“The biggest misconception districts have is that tech companies know your students better than you do, and the biggest misstep is to buy the technology first and make the student accommodate the choice,” she said. 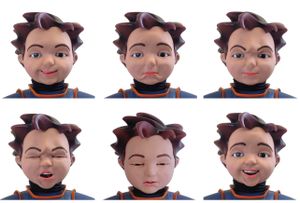 Researchers advise school systems against seeing technology as a way to deal with staffing constraints or as something that can work as a stand-alone. Goodwin says that while tech tools can be a gateway to learning new skills and behaviors, many of the benefits rely on educators who can integrate the tool thoughtfully into instruction. In other words, technology should not be seen as a replacement for a great teacher or therapist, but it can be a way to break the ice with a student who struggles to engage.

To occupational therapist Stephens at Lester Elementary, Milo is no cure-all, but it has been a valuable tool to assist her work.

“It’s a challenge every day to try and get my students to sit, focus, answer questions, and do a task,” says Stephens. “So if I can get Milo to help me with that, that’s just as good for me as a written activity, a fine motor activity, or a gross motor activity. For me, he’s another way to reach my kids.”