I used to think that snack time was an interruption in the schedule in my early childhood classroom. I offered crackers and water and then asked kids to finish up so we could move on to whatever activity was next.

Last year, however, I found ways in which snack time—previously just a pit stop in our day—could help teach social and emotional skills and build a classroom community in which each child felt valued. My students and I savored our snack time. Here’s how I did it.

When children help set up and clean up snack, they learn to take care of classmates and classroom materials. These jobs can rotate to different children each week on a job chart. In my classroom, three snack helpers set up water pitchers, napkins, and food at the student tables while their classmates read on the rug. When the tables are set, one child gives everyone a squirt of hand sanitizer; then each child brings a personal, reusable cup from a shelf to their table and eats. At the end, one child puts pitchers away; everyone else cleans up after themselves, putting leftovers in the garbage (or compost).

If children make snack, they can feel valued and proud of doing something for their classmates. And when children work with a partner, they practice collaborating as well. Children can learn that washing their hands thoroughly before they handle food is yet another way to care for themselves and their classmates.

The snacks can be simple: Think fruit-and-cheese kabobs on toothpicks; fruit salad; or sandwiches made with graham crackers and soy butter. Last year, I used soy butter and avoided peanut butter because some children were allergic to nuts. Making a snack that everyone can eat is ideal, but I think it’s OK to provide an appealing alternative to children with dietary restrictions. For example, when the snack is cream cheese on crackers, a child who is lactose-intolerant might like jelly on her cracker instead.

Your students can prepare snack in a way that works for your classroom. In my class, usually two children choose to make snack during our daily choice time, which is 45 minutes in the afternoon. We had snack after choice time. Maybe you have choice time every Friday; that could be the day you make snack. There might be other times when two students could step aside to prepare something, such as during a quiet time after lunch.

With clear recipes, children can make snack independently. I try to provide recipes with photos, often depicting the tools they will use so they know what to do. That specificity is especially helpful for kindergartners.

Ingredients can come from a variety of sources. Often my students use leftover breakfast items from our school’s cafeteria. For example, with extra cereal, granola, and sunflower seed packets, children can make trail mix. My school’s Parents Association provides limited funding for us to purchase ingredients as well. Another option might be to ask families for donations or to raise money for ingredients on DonorsChoose.org or another site.

But making snack is a bonus. Providing crackers or another commercially prepared snack might work best for you and your students. You can build community through snack by focusing on other components, such as involving children in setup and cleanup and teaching small-group conversation skills.

During snack, children can practice positive behavior. Taking turns in conversation and sharing materials, such as pitchers, helps children learn skills for group work. Teachers can model this behavior during class meetings. Last year, I found that explaining how to pour a half-cup of water from a pitcher prevented spills and conflicts during snack. And my students and I generated a list of snack conversation topics.

Children can share special snacks from home. When children share special food from home with one another, they can learn about ways in which their families are the same and different. Children who share also appreciate being in the spotlight. In my class, families could send in a treat for their child’s birthday; some families provided food linked to their cultural heritage, such as pupusas, a Salvadoran specialty. Another option: Invite families to send recipes for simple dishes that children can try making for snack. 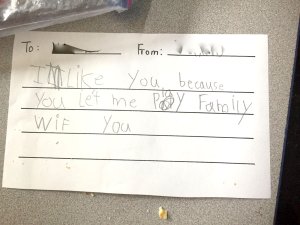 Children can have celebratory snacks. Last year, my students and I had a “friendship snack” every Thursday to help everyone feel valued. For this snack, children wrote a kind note to a classmate to read at their seat during snack (I assigned the recipients). Sometimes I gave a prompt, such as “I like you because _______.” We turned off some lights, put electric tea lights on tables, and played quiet music.

My work to make the most of snack time (and the rest of the day!) is ongoing, but the changes I’ve already made have improved our class culture.