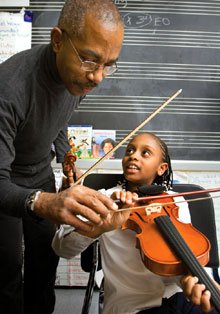 In a bright upstairs classroom at PS/MS 218, in the South Bronx, Kenneth Edwards rosins one girl's violin bow, plucks an errant bow hair from another, and listens, head cocked, as he tunes a third violin.

"Let's start with the whole notes," he says, drawing a plump oval on the chalkboard. "How many beats in a whole note?"

"Four?" someone quietly offers. Edwards nods, pleased. He then asks his 15 students, all girls, to demonstrate their bow holds, which they do with varying degrees of confidence. "Wonderful! Excellent! There's a professional hold right there," he says, smiling at one. "You're all holding the bows so well."

Edwards mixes a little math with music while delivering a stealth message of empowerment to his attentive students -- all in less than an hour after school. His class is one of many arts and cultural enrichment activities during an after-school program at Public School/Middle School 218 operated by the Women's Housing and Economic Development Corporation (WHEDCo), a Bronx-based community organization.

The program provides a safe haven, a nutritious meal, and homework help for nearly 350 students a day. But, like model after-school programs everywhere, it goes beyond those basics, giving economically disadvantaged students access to arts and cultural activities they might not experience otherwise: violin, Latin-percussion band, drama, dance, fitness, chess, computer technology, and sewing. 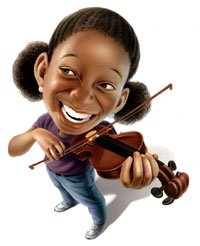 Academic support is critical, but Davon Russell, the program's coordinator, believes it is the art-enrichment and cultural-enrichment curriculum that whets students' appetites for learning outside the classroom -- and for a life beyond what they know.

"Our purpose is to enrich their lives, generate curiosity, and help students become more self-directed," says Russell, an engaging leader and former actor and track star who enjoys an easy rapport with students. "At the end of all that, we'll create a community of learners, which is the basis of everything else. We want to instill that 'Wow!' factor."

Russell doesn't know whether children and their parents approach the program with such high-minded ideals, but he knows this: "If it's not fun, there's no way they're coming."

And come, they do. Nearly 40 percent of the school's 965 students attend the after-school program. The school population is overwhelmingly from minority groups -- 84 percent Hispanic, 11 percent black -- and poor. Because 9 of 10 students qualify for reduced-price or free lunch, the school is subsidized to offer "supper," rather than just snacks, during the after-school program.

After their meal, students are divided by grades into their academic and enrichment activities. A few doors down from Edwards's violin class, two dozen students, all but two of them boys, are bent in concentration over rubber chess mats, clocking themselves against timers. ("A lot of the people who pick chess are the rowdiest kids," Russell later confides.) Nearby, boys and girls practice ballroom dancing on a dimly lit stage, touching hands and shoulders with shy grace. 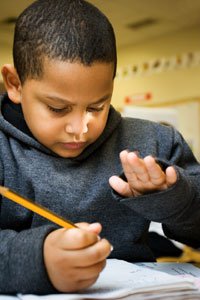 In the gym, a large group of quiet boys sit at attention in the bleachers while three instructors demonstrate football plays. (Two are local high school students who recently graduated from the after-school program themselves.)

Across the hall, in the cafeteria, a huddle of thirteen-year-old girls discuss the next step in a student-advocacy project to bring comprehensive sex-education classes into all New York public middle schools.

Many of these activities were never offered during the regular school day at PS/MS 218, but some replace instruction that was once part of the school's routine curriculum.

Take the violin and Latin-percussion classes, taught in the former music room. Until last year, the school offered a broad music curriculum, including a complete band. But when the music teacher left in fall 2005 for a university teaching job, the school couldn't find a replacement. The position was dropped from this year's budget, and school administrators don't know whether they'll regain funding.

"It's all about test scores," Russell says grimly.

Nonetheless, he appreciates the need to bolster students' academic skills. His program includes nearly an hour each day for students to complete homework, and all participants take language arts with regular teachers from this and other schools.

The program also offers specialized academic instruction, including test-preparation classes for eighth graders applying to one of the city's nine specialized high schools, including the Bronx High School of Science and the Brooklyn Latin School.

No one has analyzed whether students in the after-school program have higher standardized test scores than schoolmates who don't participate. However, a counselor from WHEDCo who counseled all eighth-grade students at PS/MS 218 on the high school admissions process found significant differences between the two groups.

Of the twenty-two eighth graders in the after-school program last year, two were admitted to the Bronx School of Science, eight earned full scholarships to private or parochial high schools, and all went to new and high-performing schools.

The seventy-one students who weren't in the after-school program didn't fare as well: None received scholarships or admittance to one of the selective public high schools, and more than one-fourth ended up in low-performing public high schools.

Among those taking test-prep classes for the selective high schools this year were several eighth-grade girls who have worked together on the sex-ed advocacy project, which began last spring. The project taught them an invaluable lesson about political activism, Russell says -- one seldom learned through books or classes.

When they researched topics for their advocacy project last spring, the girls chose sex education because birth rates among teenagers in their Bronx neighborhoods are 75 percent higher than in other parts of the city. These aren't just dry statistics to the girls; many have friends and relatives whose educations ended abruptly with teen pregnancies. "They ruined their lives when they got pregnant," says participant Yanilsa Frias. 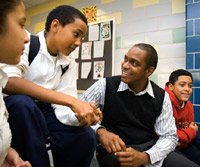 They researched the topic, informed classmates and community leaders, and petitioned their school to provide comprehensive sex education beyond the state's minimum requirements for HIV/AIDS-prevention classes. But what seemed a no-brainer to them was controversial outside the school. Administrators moved slowly on teaching sex ed due to parental pressure, and even some of the girls' own parents had trouble with the notion. "My mother was ready to throw me out the window," says Ashley Reyes. (Her mother later relented after Reyes's grandfather intervened in her favor.)

Student Katherine George smirks when she recalls parents' opposition to sex ed in schools. "They thought we weren't ready to learn about it," George says. "They're not really aware of what's going on."

Russell knew, however, and supported their efforts. "Part of our work, as a community-based organization, is around teen pregnancy to begin with," he says. "These girls wanted this to be something more universal. They're doing something that is not normal in the school."

Not normal during regular school hours, perhaps, but in the after-school program? A perfect fit. Russell shrugs slightly and grins, adding, "How could we not?"

Beth Frerking has more than two decades of experience as a national reporter, Washington bureau chief, and journalism educator. She writes for print and online magazines and newspapers around the country.