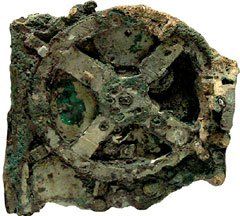 Just over a century ago, sponge divers working the waters near Antikythera, a Greek island between the mainland and Crete, discovered the wreck of an ancient ship. Now, anyone who has ever gone snorkeling in Greece knows it's not unusual to swim over bits and pieces of the past, usually broken wine and grain pots that once lay in the holds of sunken sailing ships devoured by worms long ago.

But what the sponge divers found was anything but usual: the pieces of a device of sorts, consisting of thirty bronze gears and dozens of smaller parts and fragments encrusted with rust and corrosion. What has become known as the Antikythera Mechanism was a mystery even to the curators who put it on display in the archaeological museum in Athens.

It has been studied over the years since its discovery, and at various times scientists and archaeologists have attempted to replicate the device. But since 2001, a group of European scientists called the Antikythera Mechanism Research Project has utilized state-of-the-art technology both to decide definitively the purpose of the device and to build an accurate replica. This reproduction is a key feature of a newly launched exhibition called Gods, Myths, and Mortals: Discover Ancient Greece at New York City's Children's Museum of Manhattan.

"The mechanism is displayed in a Plexiglas case," says Eleni Daniels, a consultant for the museum. "Along with the device, there is software to let kids study one fragment of the machine. Kids don't study the classics anymore, and we want them to realize how intelligent the ancient Greeks were and how advanced their science was." The museum plans to develop an interactive Web site within the next few months so students can study the mechanism without traveling to New York.

The projects core team of specialists -- astronomers Xenophon Moussas, Mike Edmunds, and John Seiradakis, mathematician Tony Freeth, physicist Yannis Bitsakis, and paleographer Agamemnon Tselikas -- used technologies developed by Hewlett-Packard Labs and X-Tek Group, based in the United Kingdom, to uncover and decipher inscriptions etched into the brass of fragments of the mechanism, raising to a new level radiographic research that began in the 1960s. While HP supplied software, X-Tek shipped to Athens an 8-ton X-ray machine developed for safety inspections of jet turbines. This device, nicknamed Bladerunner, produced three-dimensional images of what lay beneath 2,000 years of corrosion.

The inscription turned out to be a kind of user's manual, enabling the team to determine that the thirty hand-cut bronze gears and dials (originally housed in a wooden frame) formed an analog computer most likely used to plot the orbits of the planets, predict eclipses, and affix the date for the quadrennial Olympic games. The inscriptions include the names of the planets and the signs of the zodiac, plus the word Ispania, the oldest known text reference to Spain. Based on the form of the Greek letters on the device, Moussas estimated it was constructed during the first half of the first century BC, making it what is now thought of as the earliest known computer.

Moussas, who grew up in Athens not far from the archaeological museum and saw the device as a child, considers it more complex than anything created for at least the next thousand years. Though the mechanism was found on the sea floor, it was not used for navigation. Instead, some scientists think the ship on which it was carried may have sunk while carrying the remarkable machine to Rome.

The Antikythera Mechanism is a dramatic indication that if the subsequent fall of the Roman Empire had not led to the Dark Ages, technology and science in the Western world might have progressed far faster than they did. Just imagine what Copernicus might have done if hed had an iteration of the Antikythera Mechanism in his candlelit study. "Dr. Moussas and his team are giving the children of New York a priceless scientific and educational gift," says Andrew Ackerman, executive director of the Children's Museum.

After an eighteen-month sojourn there, the device's reproduction, as part of the Gods, Myths, and Mortals exhibition, will begin a four-year tour of several other major American cities.