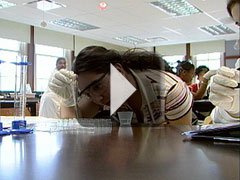 Editor's Note: Former Chicago First Lady Maggie Daley passed away in 2011 at the age of 68. You can read more about her life and achievements in this article from the Chicago Tribune. In December 2013, George Lucas and Mellody Hobson announced a $25 million donation to the organization in the article below, After School Matters. You can learn more about their contribution in this Chicago Tribune article.

At age seventeen, Chom Pasidparchya can do something most boys his age cannot: He can cook -- really cook -- whipping up gourmet dishes and decadent desserts that belie his youthful, round face, and slight adolescent frame.

His uncle, Arun Sampanthavivat, a renowned chef specializing in Southeast Asian cuisine, piqued Pasidparchya’s culinary curiosity at an early age. But Pasidparchya credits the hands-on experience and professional tutelage he has gained through the Chicago Public Schools’ After School Matters culinary-arts program -- and a little of this and a dash of that -- with inspiring him to pursue a career as a chef.

“I love everything about cooking. It builds responsibility and teaches commitment and teamwork,” says Pasidparchya, one of 28,000 Chicago public school students enrolled in the groundbreaking After School Matters apprenticeship-training program.

Three days a week, for three hours each day, participants learn marketable job skills from industry professionals who provide hands-on instruction in careers ranging from the visual and performing arts to sports to technology. During these sessions, students earn $6-$15 an hour, and they have access to scholarships and internship opportunities when they graduate.

Even more valuable than the money, however, is the absolute certainty with which students such as Izamar Virafuentes say they plan to pursue these careers.

“I know that’s what I want to do,” says Virafuentes, a junior at Lane Tech College Prep High School who’s enrolled in the After School Matters graphic design curriculum. “I can use software that won’t work on my computer at home. I learned about color theory. I actually look at things now, like store logos, and compare them as art. I can’t stop now. I’m really hypnotized by my work.”

Using federal dollars earmarked for summer jobs for disadvantaged youths, After School Matters was cofounded in 1990 by Maggie Daley (wife of Chicago mayor Richard Daley), and Lois Weisberg, commissioner of the Chicago Department of Cultural Affairs. The first class consisted of a group of 200 art students who worked out of tents hoisted on a vacant plot of prime real estate in downtown Chicago known as Block 37.

“There weren’t a lot of creative summer jobs, so we created a meaningful program and purposeful jobs in the arts,” says Daley. The two women also raised private money from foundations and corporations to extend the program to more students. “I disdain poverty programs,” she adds. “Every kid in a poverty program knows they’re in a poverty program. We deliberately raised private money so kids from all over the city could participate, from the Gold Coast to public housing. They came to like each other, to trust each other.”

The initial summer arts program came to be known as Gallery 37 -- the name also given to the rehabilitated building now housing the visual-arts, performing-arts, media-arts, and culinary-arts programs. Today, After School Matters is available in fifty-eight schools, and it partners with one-hundred community groups and governmental entities.

Classes are held in school buildings and in city parks and have been expanded to embrace a wide range of careers. Words 37, for instance, attracts youths interested in theater, performance poetry, creative writing, journalism, and communications. The Sports 37 program instructs students in the rules and principles of a variety of sports and trains them to become referees, coaches, and lifeguards. Tech 37, the newest addition to After School Matters, provides instruction in Web design, digital editing, music production, and robot technology.

“In Chicago, the teens know the number thirty-seven is attached to quality,” says David Sinski, executive director of After School Matters, adding that the program targets students in Chicago’s roughest neighborhoods.

“We want to bring the resources where they are needed most,” Sinski adds, citing an initial reluctance among some teachers and school administrators to keep schools open in the evenings after regular school hours. “It takes a commitment not to be afraid of young people. Research shows after-school programs contribute to their social learning.”

Programs are designed around teens’ career interests, and each year they attract more students than the $30 million budget will support. “The culinary-arts program is really popular -- 127 applied for 40 slots,” explains Sinski. “But we lack the resources to start more programs.”

Daley attributes the high demand to the fact that After School Matters has successfully conquered what she calls the “not-cool factor” many teens attach to after-school activities.

“We made this cool for kids,” she says. “Most of the kids who enter stay in the program until completion.”

That is, indeed, a noteworthy statistic in a public school system so beleaguered that, in 1995, the mayor took it over to spearhead radical reforms aimed at reversing negative trends such as low test scores and soaring high school dropout rates. According to Daley, students attending After School Matters are less likely to be truant, have fewer course failures, and are three times more likely to graduate.

“Teenagers are very hungry,” Daley says. “All you have to do is bring food to the table, and they will feast on it.”

T. Shawn Taylor is a freelance writer in the Chicago area.