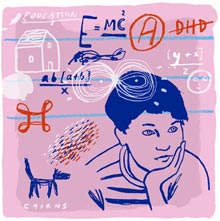 My son Cole's idea of a good time is to pore over a science book and pelt me with questions. He'll tinker with an electronics kit or read for hours. He enjoys a science documentary almost as much as Ed, Edd, n Eddy.

I had assumed these interests would make him a great student. I was wrong. Instead, school has been an ordeal. Why? Because Cole will tune out what doesn't interest him. He can get lost going from one simple task to another, and his imagination revs up without warning, taking him from spelling quiz to intergalactic mission in a matter of seconds.

He's been kept in during "Fun Day," had his desk separated from the class, and received enough "Sad Grams" to wallpaper his room. He's been banned from recess and given detention -- in first grade. I've been called to endless meetings, asked to have him evaluated by a therapist, and offered not-so-subtle suggestions to medicate him. "He's not a discipline problem," offered one teacher. "But he isn't paying attention."

Cole is now in third grade. His problem is that he's a dreamer. And he's not the only one. In fact, it seems as if just about everyone I know knows someone who has (or had) attention problems serious enough to bring isolation, medication, or punishment in school. Attention deficit hyperactivity disorder (ADHD), defined by the American Academy of Pediatrics as a "condition of the brain that makes it difficult for children to control their behavior," affects an estimated 4 to 12 percent of all school-age children -- about three times more boys than girls. Because those children may be labeled "bad" kids or space cadets, says the academy, the impact on their self-esteem can be devastating.

In first grade, Cole's teacher complained that my son never seemed to know what was going on. I shared studies with her about how bright children can appear slow or inattentive when bored. Her response was to pity me, an obviously deluded parent, and to give up on Cole. "We can't make things slow enough for him," she told me in another meeting. When I insisted that my son needed a challenge, she came up with a complicated assignment and gave him a week to complete it. He finished on time, but the school year was nearly over. It was too late, though the teacher did admit she had learned a lot that year.

So had I. That summer, I resolved that Cole's needs would be met at school, or I'd join the ranks of homeschooling parents. On the first day of second grade, I told the teacher about Cole's attention problems and shared his psychiatric evaluation. It found no evidence of ADHD, an IQ in the gifted range, and signs of depression, presumably from all the negative attention.

This wonderful teacher listened sympathetically and took Cole to lunch. She then offered him support and understanding. Cole declined recess that day, preferring to hang around with his new best friend. That affectionate relationship, and the teacher's willingness to craft Cole a challenging curriculum, gave Cole a new lease on school.

But the circumstances couldn't last. She warned me that third grade -- with a less accommodating teacher -- might not go so well. So I transferred Cole to a local magnet school for math, science, and technology, and, once again, Cole got the understanding teacher he needed. She says he's a difficult case, "but I know he's smart because of the amazing questions he asks me."

Our greatest hurdle still loomed: the grueling End of Grade (EOG) assessment tests, which every one of Cole's teachers had warned me he wouldn't pass. He drew cartoons all over the preliminary test, failing to fill in a single bubble. When his teacher suggested Cole be designated ADHD to take the test in May, I was crushed, but I finally agreed.

Cole, however, hated the idea. Suddenly, he started finishing tests -- and earning As. I assumed it was a matter of time, and the fear of an ADHD stigma, that caused the change, but Cole credits the teachers who believed in him. Previous ones "always told me what not to do," he says. The good ones, he explains, "make me feel like I can do anything."

Cole aced the EOG tests, though I don't believe he could have done it without teachers willing to embrace him. Yes, my son is a dreamer, but it is not necessarily a bad thing. Albert Einstein, not a big fan of school, said, "The gift of fantasy has meant more to me than my talent for absorbing positive knowledge." I'm no Einstein, but I have to agree. I know Cole does, too.

Christina Wood is a freelance writer living in North Carolina.