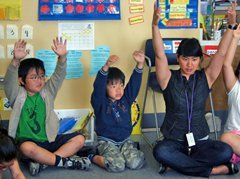 Photo Credit: Malaika Costello-Dougherty
Morning yoga in class teaches kids to breathe.
On a cool spring morning, as the fog over San Francisco begins to clear, about twenty second graders are balanced sideways on one hand and one foot, each kid's body forming the hypotenuse of a right triangle.

Though the casual observer might not know it, these students are following teacher Rene Mitsui's instructions to a tee. They are practicing yoga, and this day, they are learning a new move. Mitsui calls it the rainbow pose.

Mitsui has been teaching yoga to her Dianne Feinstein Elementary School students since August. Although free time for such activities is scarce, Mitsui works it in when she can. The students like it, and Mitsui has found that it helps them become more aware of their bodies and reminds them of how to be still.

"PE is one of the first things to get pushed aside," notes Mitsui. "I figured if I did yoga with my class, at least I'd be giving them some kind of physical outlet."

Weaving yoga into the curriculum is just one way for teachers to improve kids' physical well-being without leaving the classroom.

As research linking physical fitness to academic success continues to emerge, teachers such as Mitsui are coming up with creative ways to keep kids active during teaching time, instead of relying on recess and those ever-dwindling PE hours.

Teachers say they find that using movement in the classroom doesn't just get the jitters out, but actually makes for better learning as well, because engaging students' bodies in turn activates their minds.

Though she is not yet ready to publish her results, Castelli says they have been positive. "Over the last decade, we have gained some real confirmation from the animal literature that exercise grows brain cells," she adds.

Research by Castelli and her colleagues has shown that the more fit the person -- adult or child -- the more quickly and accurately he or she responds, in comparison with unfit individuals, to cognitive tests. It's not exactly clear why, Castelli notes. It could be the result of more oxygen to the brain, or the actual growth of the brain cells. "In general, it does sharpen the mind," she says.

Marcia Corby, an eighth-grade math teacher in Phoenix, keeps her students' minds sharp by making sure they are on their feet as much as possible during her forty-five-minute class periods.

"Kids don't fall asleep in my class, because they can't," says Corby, who has taught math in inner city Phoenix for four years. "We very rarely sit for more than ten minutes." In Corby's classroom, at R.E. Simpson School, students do cooperative exercises, and sometimes throw mini beach balls around, during one-minute "brain breaks" that are a chance for them to get their wiggles out. Corby also uses them to rouse students who are sleepy after lunch.

In addition, Corby does something unique. She teachers her students "belates," a system for learning math she came up with herself that consists of steps, gestures, and words the students do and recite in unison. (The name is a combination of Corby's maiden name, Beldock, and karate, because, Corby joked, the movements look sort of like the martial art.)

"My theory is that the best form of memory is in your muscles," she states. "If I can get them to put the math knowledge into their muscles, they've got a fighting chance."

Some belates moves are relatively simple, such as placing forearms side by side in front of the body to show parallel lines. Others are much more complex; a how-to for dividing decimals is lengthy and looks sort of like a line dance.

According to Corby, her system may look goofy, but it works. And she has evidence to back it up. Last year, the Rodel Charitable Foundation of Arizona, a group that identifies teachers with a track record of extraordinary student achievement in high-poverty schools, recognized Corby as an exemplary teacher.

"It's really cool. If you watch them during tests, they make all these movements to try to remember things," Corby says of her students. "It's subconscious. You'll see them start to do a movement to something, and it triggers their memory."

Back at San Francisco's Dianne Feinstein Elementary School, first-grade teacher Michael Sova and his students are sitting in a circle.

The class responds immediately. "What do you see?" they ask as a chorus.

"I see caterpillars crawling on a branch!" Sova exclaims.

The children hit the floor and begin inching around the classroom.

Next, Sova "sees" chrysalises hanging on a vine and, finally, a gentle butterfly, which prompts about twenty budding butterflies to stand up on their tiptoes and, more or less gracefully, flap their wings.

An exercise such as "I see, I see" -- which Sova picked up from first-grade teacher Hana Huang at San Francisco's Miraloma Elementary School -- might seem like a way just to pass the minutes between the end of circle time and recess. But for Sova, who often incorporates recent lessons into the exercise, it is part of a concerted effort to keep the students moving.

"It's all about physical activity stimulating the mind, reaching different learners in different ways," Sova explains. "I think kids are all kinesthetic learners to varying degrees."

Working movement into his classroom is something Sova is focusing on this year. He sticks it in whenever he can: doing role-playing during social studies, acting out vocabulary during language arts, and having students interpret math problems by demonstrating answers with, for example, the correct amount of jumping jacks.

"They totally love it," Sova says. "Any chance to get out of the class and just break up the routine -- they are thrilled."

Anna Oberthur is a freelance reporter based in the San Francisco Bay area.