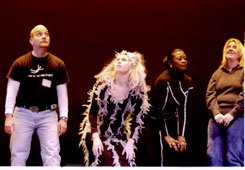 The Bard said, "All the world's a stage," but if you want to face the slings and arrows of hostile audiences, get thee to a school. Young critics don't hesitate to give their thumbs down (or use other digits) to pass judgment on a teacher's performance, but now, teachers are getting acting tips from Broadway and beyond.

More than a thousand participants, for instance, attend the Lincoln Center Institute's five-day National Educator Workshops in New York City each year to learn how they can sing, dance, act, and paint their way to becoming better and more entertaining instructors. It's an invigorating week for many educators, who go through a wide range of acting exercises -- from throaty vocal warm-ups to improvising characters in a royal court during Shakespeare's Twelfth Night -- in order to discover how gesture and voice enhance a stage persona.

It's an eye-opening experience for many. "Working with Shakespeare, I learned about using language to build excitement," says Kevin Williams, a science teacher at Harlem's Frederick Douglass Academy II. "My teaching persona is a lot more excited now." The workshop, he adds, "made me more of a risk taker in the classroom." The butterflies he felt before performing also made Williams more empathetic to students who perform in front of a class.

Cathryn Williams, deputy director of the institute, says the acting program opens up the minds and, consequently, teaching styles of many. Educators learn that interactive conversations, the core of good drama, also can play a strong role in the classroom. "Teachers leave the workshops knowing how to support a richer questioning process," she says. "This leads the students to design deeper questions."

By engaging his students to observe first and then follow up with more thoughtful queries, Kevin Williams has seen positive results. "Their writing skills have improved," he notes. "They can make more abstract connections."

Teachers can find similar programs through the Association of Institutes for Aesthetic Education, which tracks at least twenty-five such institutions nationwide. Williams, the reluctant thespian, says it's time well spent."My teaching technique improved immediately after I took the course," he says, and the following year, alocal chamber of commerce gave him a Teacher of the Year award. Now, that's entertainment.

Don Lipper is a freelance writer.